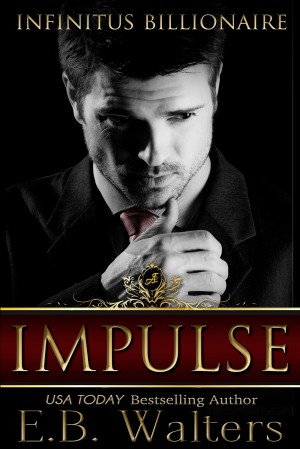 By E. B. Walters
Adult

Rated 5.00/5 based on 2 reviews
Jillian Finnegan should have kept walking when Lex Fitzgerald pulled up outside her studio trailer.
But, the look in his eyes and his unexpected proposal proves too much to resist. Paying her family’s debt in exchange for pretending to be his wife seems like a fair trade. She should have known better. More
USA Today Bestselling Series

Jillian Finnegan should have kept walking when Lex Fitzgerald pulled up outside her studio trailer.

But, the look in his eyes and his unexpected proposal proves too much to resist. Paying her family’s debt in exchange for pretending to be his wife seems like a fair trade. She should have known better.

Lex needs a secret weapon to defeat a competitor and finds it in Jillian Finnegan. He has no intention of letting her potty mouth, her crazy lifestyle, or her eccentric family get in his way. However, sparks start to fly and Lex realizes he’s finally met his match.

This romance novel contains explicit contents and it's not advised for readers under 18. This is a 2-part book. Book 2 is available for purchase.

Ednah B Walters is a multi-published author of four different series: She writes contemporary romance under E. B. Walters. The Fitzgerald Family series started with SLOW BURN. There are six books in this series. She has a new series, Infinitus Billionaire. Impulse (book 1) was published in January 2015. Indulge (book 2) will be released in the fall.

Learn more about E. B. Walters

About the Series: Infinitus Billionaires

Eight men bound by an incident in their past forge an alliance.

Reviews of Impulse: Infinitus Billionaire by E. B. Walters

I really enjoyed it. I love Alexander "Lex" Fitzgerald and Jillian "Jilly" Finnegan. The storyline was a little slow; but, as you read it got better. I love Lex - rich, protective, controlling, extreme sports enthusiast, passionate, sensual, sexy, smooth talking dirty mouth alpha man ; then, there is Jillian - stuntwoman for the stars, extreme sports enthusiast, loves bikes, guns, martial arts trained, beautiful, has curves in all the right places, great sense of humor, protective, passionate, sensual, foul mouthed, sensitive, and strong. I love the family dynamics - love 'em, hate 'em, will do anything for them, loyal to a fault and overprotective. They both come from big families and both are the main caretakers. I like the twist the storyline took especially with Jillian's lineage. The sex was hot and easy to picture. Lex's millionare posse sounds hot. Great start to the series.

Feast your eyes on this sexy , panty dropping , yet intriguing romance. Impulse is the final installment of the Fitzgerald series and I have to say that This author put it through with a bang and confetti !

Sex on a stick is Mr Lex Fitzgerald! I love this man - he oozes sex appeal. His demeanor is powerful and I have to say he is one of my all time favourite characters in this series.

This man will not only have your toes curling but your e reader on fire.

Impulse is the Last Fitzgerald book that Ednah will write - but she has left an opening for her new series about a secret society Of Billionaires with one agenda. ** Infinitus Agendum * We will see more of this in the works and I eagerly await to see the stories from Dom, Sloan, Rod, Cade, Nate, Aiden, and Lucien.

In Impulse we meet Lex - he is every woman's dream. Handsome with brawn - sexy and certainly fearless. He usually gets want he wants and pursues it will full force and determination.

Lex meets Jillian - who is sexy, fearless, sassy, smart , strong and independent. She takes no shit from anyone including pompus Mr Lex Fitzgerald. She tells him what's on her mind and tries to avoid him with all that she has within. But the undeniable force they have is like a magnet !


From the first moment they both lay eyes upon each other the chemistry is zinging and the electricity is buzzing. Jillian tries to avoid Lex - Lex pursues Jilly with a force to be reckoned with.

The storyline is well paced, giving the reader depth and definition into the characters. We see other characters from previous books in this one and also as stated we meet a whole group of hotties. ** squeal **

The sex scenes between Lex and Jillian are hot , sizzling and panty dropping.

The plot is well delivered and written and the ending MMMMMM don't get me started haha..

Another fantastic installment in the series. Loved this story and eagerly await more installments to come.


Sinfully delicious, this enchanting contemporary romance, is sure to delight readers till the very last page.

You have subscribed to alerts for E. B. Walters.

You have been added to E. B. Walters's favorite list.

You can also sign-up to receive email notifications whenever E. B. Walters releases a new book.