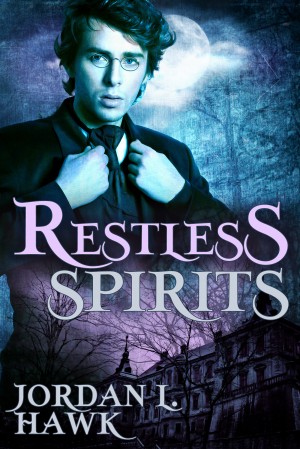 Rated 4.50/5 based on 4 reviews
A contest between science and spiritualism pits inventor Henry Strauss against the dangerously appealing Vincent Night. One of them must exorcise the ghosts of Reyhome Castle in order to win the prize. But the evil stalking the halls of Reyhome Castle wants to claim not just Henry and Vincent’s lives, but their very souls. More
After losing the family fortune to a fraudulent psychic, inventor Henry Strauss is determined to bring the otherworld under control through the application of science. All he needs is a genuine haunting to prove his Electro-Séance will work. A letter from wealthy industrialist Dominic Gladfield seems the answer to his prayers. Gladfield’s proposition: a contest pitting science against spiritualism, with a hefty prize for the winner.

The contest takes Henry to Reyhome Castle, the site of a series of brutal murders decades earlier. There he meets his rival for the prize, the dangerously appealing Vincent Night. Vincent is handsome, charming…and determined to get Henry into bed.

Henry can’t afford to fall for a spirit medium, let alone the competition. But nothing in the haunted mansion is quite as it seems, and soon winning the contest is the least of Henry’s concerns.

For the evil stalking the halls of Reyhome Castle wants to claim not just Henry and Vincent’s lives, but their very souls.

Other books by Jordan L. Hawk:

Heart of the Dragon (short story)

About the Series: Spirits

A scientist and a spiritualist medium join together to hunt things that go bump in the night.

Another complete success from Jordan L. Hawk. I don't even know when I bought this book (or maybe picked it up free), no idea. I was just scrolling through my Kindle, saw it and was like, "Oh, a Hawk book. Gotta read that right now." So, I did and I was happy.

The ghost story is scary, maybe not overly original, but scary. The characters are engaging and I loved the diversity of the cast. Did it feel a little forced? Maybe a bit, I guessed Lizzie's secret long before it was revealed, for example. But I was still too thrilled to find it to really care. There were not a lot of characters in general and it's a historical, so the book is a little limited, but one of the main characters is Native American, another Black, a third with secret I won't spoil, of course two are gay and notably, the book does not gloss over the importance and difficulties of these aspects of their character in the time period.

I did think the final battle felt a little abrupt and the villain obvious. But those are small quibbles with a book that I generally really enjoyed. The writing and editing are marvelous and I can't wait to pick up the next one in the series.

fantastic start to a new series! can't wait for the next book!

Ok, if this wasn't a Jordan L. Hawk book and I trusted and liked her book, I would have stopped reading about 50 pages in as I REALLY dislike Henry. He tries to do better near the end of the book but I can only hope for redemption in the sequel because his "sorry" just didn't cut it for me here. He was an a**, plain and simple.
The story itself is excellently written with a really scary ghost plot. The atmosphere is comparable to "Theshold" by the same author. The style and mores of the Victorian era feel authentic and believable. Vincent, Lizzie and Jo are characters I want to know more about, and Henry, well, I trust Jordan's talents as a writer. Let's see what the next book brings.

Another Winner of Jodan L Hawk's!
When I read the Whyborne & Griffin series, I thought- historical, paranormal, mm. But all the way through this book I thought mm Steampunk. And I don't consider Native American interracial, but I suppose some do. All that said- this was a suspenseful, thrilling paranormal fantasy, story that could've been now or in the past. It was almost like an alternative universe. Similar but different. There's only one sex scene, but it was loving and beautiful, and you truly don't miss there not being more. You're thrilled and cheering for Henry and Vincent at the end, which says it all. Great beginning to what I hope is another great series. Yay! ;D