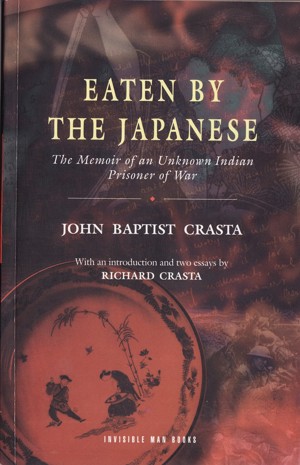 Eaten by the Japanese: The Memoir of an Unknown Indian Prisoner of War

By John Baptist Crasta
John Baptist Crasta's only mistake was to be in the wrong place at the wrong time--Singapore, when the Japanese invaded--and to be a man of "rectitude and courage". His gripping World War II memoir tells of his miraculous survival through 3.5 years as a POW of the Japanese. The memoir itself miraculously survives 51 years until it is published, by his son, with added essays, just before his death! More
"Eaten by the Japanese" is the inspiring story of John Baptist Crasta, an Indian soldier in the British Indian Army, who miraculously survives 3 1/2 years of inhuman imprisonment and bombardment during World War II. Rescued by Australians, he returns home to India and writes this memoir in 1946. He then waits another 51 years before it is read and published by his son, who by then is an author living in the United States. In the process of reading and publishing the book, the son rediscovers his father.

To begin with one of the rave reviews: “What emerges in Crasta’s survivor’s tale is not a mere story of self but an epic of collective agony. This is the story, then, of a nation’s agony as well as a man’s, a man’s survival as well as that of a nation’s, in both cases to await the next chapter in a complex narrative.”

The story begins in Singapore, where John Baptist Crasta was posted, and the British commander surrenders unconditionally to the invading Japanese. Rather than switch sides simply to save his own life, he chooses to suffer through 3.5 years of horrific imprisonment, including a journey in the Torture Ship to Torture Island.

This shocking and poignant story of World War II and its forgotten Indian Prisoners of War has never been told before from the viewpoint of an ordinary Indian soldier who was there, as one of its actor-victims.

“A classic in military history, telling the story of men trapped in a world of torture, starvation, and death"—Roger Mansell, War historian, in Tameme Magazine

“You see the horror of war, without a trace of artifice, through the eyes of one who was there, the writing a simple act of catharsis. A war memoir that ranks with the best.”—Professor Mark Ledbetter, Nisei University

This 32,000-word book made Professor Barry Fruchter write: “Striking and raw, an antidote to myth. Something to be treasured. This is the kind of record that this generation is losing fast, and we need to hold on to this. It made me think of what had happened to my own father's memoirs, which were lost.”
Available ebook formats: epub mobi pdf lrf pdb txt html
First 10% Sample: epub mobi (Kindle) lrf more Online Reader
pdb
Price: $3.99 USD
Buy Add to Library Give as a Gift
How gifting works
Create Widget
Tags: world war ii fathers and sons cannibalism japanese history new britain japanese war crimes prisoner of war memoir indian national army singapore history british indian army japanese cuisine
About John Baptist Crasta

John Baptist Crasta, 1910-1999, was the father of Richard Crasta, the author of eight books and minor co-author and editor of EATEN BY THE JAPANESE. He was born in the village of Kinnigoli in India, and walked barefoot for 20 miles through tiger-infested jungles to Mangalore to enroll in the high school there. Miraculously escaping an earthquake at Quetta (now in Pakistan), he joined the British Indian Army and was captured by the Japanese during their blitzkrieg invasion of Singapore. His memoir of being a Prisoner-of-War of the Japanese during World War II was published by his son, who edited the book and added an introduction and three essays to it. The book was originally launched on December 27, 1997, and later in 1999 (second edition). It is now published in a new e-book edition on Smashwords and on other e-book platforms.

At the time that it happened, John Baptist Crasta was the oldest Indian to have his first book published: he was 87 years old when it happened, and the manuscript had lain in his steel trunk for 51 years after he wrote it.

You have subscribed to alerts for John Baptist Crasta.

You have been added to John Baptist Crasta's favorite list.

You can also sign-up to receive email notifications whenever John Baptist Crasta releases a new book.