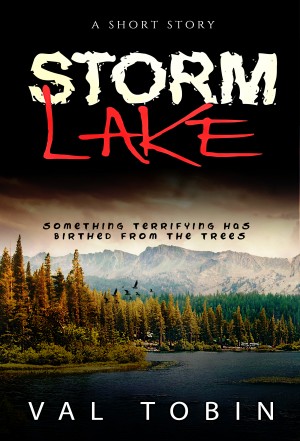 By Val Tobin
Rated 4.00/5 based on 2 reviews
A girl and her little brother struggle to save themselves when trapped in an isolated marina by flesh-eating creatures. More
Thirteen-year-old Rachel and her little brother, Jeff, are looking forward to a weekend of canoeing and spending time with their friends up at the family cottage on Storm Lake. But something terrifying has birthed itself from the trees, and the kids find themselves trapped in an isolated marina fighting for their lives.

Val Tobin's love of reading translated into a love of writing from the time she was six years old. She also had a fascination for the paranormal and occult, which is reflected in her writing. Her lifelong passions were interrupted by a sojourn into programming and a ten-year career in software/Web development.

She became a certified Reiki Master/Teacher and Angel Therapy Practitioner® with Advanced Training, certified by Doreen Virtue, Ph.D. in 2008. She then trained in mediumship, also with Doreen Virtue, in Kona, Hawaii. Val received a Bachelor of Science in Parapsychic Science in 2010, and is working on a masters degree in Parapsychology. She is a member of a few paranormal investigation and UFO groups, and participates in investigations and sky watches. Val spends most of her time writing, presenting workshops, studying, and enjoying time with her husband, two kids, and three grandkids.

Val wrote for Community MX, a site dedicated to all things Macromedia, and had a story published in Doreen Virtue's Hay House book "Angel Words." "The Experiencers" is her first novel. Val lives in Newmarket, Ontario, with her husband and cat.

About the Series: Storm Lake Stories

It all started at Storm Lake ...

Thirteen-year-old Rachel Needham almost loses her life to the claws and fangs of the grendels, Storm Lake’s monsters. Twelve years later, she leads teams of protectors into the forests to hunt down and eradicate the scourge that has spread around the world.

Death hides in the treetops ...

Read the whole story in Storm Lake and The Hunted.

You’ll never want to walk under a tree again …

This story, which starts out so normal, turns compellingly creepy very quickly and then doesn't let go. Stylistically clean but eerily atmospheric, this reminded me at times of Stephen King.

Wow, what a great mini book.. I was literally sitting on the edge of my chair reading. Val, you captured everything and pulled me easily into the story. Thanks for writing it!

You have subscribed to alerts for Val Tobin.

You have been added to Val Tobin's favorite list.

You can also sign-up to receive email notifications whenever Val Tobin releases a new book.