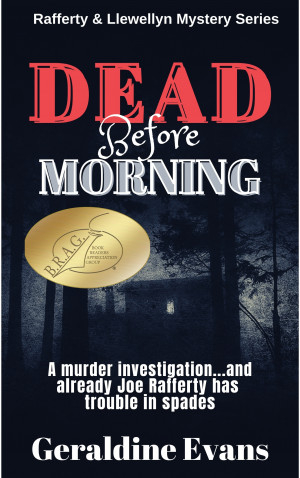 By Geraldine Evans
#1 of 15 Just-promoted Brit DI Joe Rafferty lands the case of 'The Faceless Lady', as the media has dubbed it. So he could do without his wily Ma's wheedling demand that he spring her niece's fiance from poky in time for their wedding. A critical Superintendent, a gung ho media who seize on the 'Faceless Lady' case and the latest tricksy family problem put Rafferty between a rock and a hard place. More
#1 of 15 in the Rafferty & Llewellyn British Cozy Mystery Series

Newly-promoted British Detective Joe Rafferty really should have expected that his first case since his promotion would encourage the mischievous fates to have some fun and games at his expense.

But, even though he is imbued with enough Irish superstition to use up the nation's salt stocks, he never anticipated that he would be landed with the case of the 'Faceless Lady'. At least, not at the same time that his wily Ma involves him in the latest Rafferty family law-bending drama.

Cursed by coming from a large Irish Catholic clan who believe obeying the Laws of the Land is an optional extra, Ma has temporarily put aside her determined match-making ambitions for long enough to extract Rafferty's promise that he would get her niece's fiancé out of poky in time for their wedding. Rafferty has no idea how he is to organise this Great Escape so that it goes more smoothly than most things in the Rafferty experience.

All he does know is that, between his fire-breathing Superintendent, his Ma's emotional blackmail, an ever-critical media who has latched on to the case of the Faceless Lady with relish, and a chief suspect who's not only a bosom buddy of the Chief Constable, but who also seems to believe that a little bribery and corruption will ensure this latest blip in the crime statistics is solved to his satisfaction, Rafferty’s not a happy bunny.

But did the fates really have to saddle him with an educationally-superior new partner in the shape of stiff, more moral than the Pope, Welsh Methodist Dafyd Llewellyn, too?

'Evans' humor seriously added to my enjoyment of her book. The series has stand out central characters and clever plots.’ AUNT AGATHA’S BOOKSHOP, ANN ARBOR

In this first book in the quirky, not quite so Traditional British mystery series, there is humour in plenty, more family drama than you can shake a stick at and not a little mayhem. At its heart a murder mystery with enough twists and turns to test a Boy Scout's knot skills to the limit.

For lovers of cozy mysteries and police procedurals.

'Evans brings wit and insight to this tale of looking for love in all the wrong places.'
KIRKUS STARRED REVIEW FOR DYING FOR YOU #6 in Rafferty series

'Clever plotting and polished prose make for a cracking good British police procedural.' BOOKLIST
ON BLOOD ON THE BONES #9 in Rafferty series

'Evans' humour seriously added to my enjoyment of her book. The series has stand out central characters and clever plots.' AUNT AGATHA'S BOOKSHOP, ANN ARBOR US ON DEAD BEFORE MORNING

Geraldine Evans is the traditionally-published British author of eighteen novels and, since turning indie in 2010, she has also independently published more novels, including two new Rafferty & Llewellyn, and other novels, plus four non-fiction, as well as bringing out her backlist as ebooks.

Her publishers include Macmillan, St Martin's Press (US), Worldwide (US pb), Isis Soundings (audio), Severn House (HB, PB AND LP, US and UK) and F A Thorpe (large print).

Geraldine has been writing since her twenties and published since her thirties. She decided to turn indie after nearly twenty years as a traditionally-published author.

Although originally a Londoner, Geraldine moved to a market town in Norfolk (UK) in 2000.

Her interests include growing plants from cuttings and seeds, painting portraits, mostly of her unwilling 'volunteered', family, and learning keyboards with a very patient tutor.

Here is a list of Geraldine Evans' published novels:

HERE ARE SOME REVIEWS FOR GERALDINE'S BOOKS:

DYING FOR YOU #6 RAFFERTY SERIES
'Evans brings wit and insight to this tale of looking for love in all the wrong places.'
KIRKUS STARRED REVIEW FOR DYING FOR YOU #6 in Rafferty series

'It's bad enough being suspected of a double murder, worse still when it's your alter ego being pursued and it's the pits when you are the policeman in charge of supposedly catching yourself. I thoroughly enjoyed Dying For You, the sixth in the series. A lot of humour is injected in Rafferty's narrative. He's got himself in an impossible situation and one wonders what can go wrong next. I savoured this book and I'm keen to read the rest in the series asap.' EUROCRIME

'A fun read for the mystery lover who enjoys tales with a twist. A cleverly plotted tale. Enjoy.' MURDER AND MAYHEM BOOKCLUB

DEADLY REUNION #14
'This is another excellent entry in this marvellous series. The characters spring off the page. The dialogue is sparkling, great interplay between the two detectives, and the mystery is intriguing to the end.’ EUROCRIME

ABSOLUTE POISON #5
‘Well, this was a real find. Geraldine Evans knows how to make a character leap off the pages at you.’ LIZZIE HAYES, MYSTERY PEOPLE

'Evans' humour seriously added to my enjoyment of her book. The series has stand out central characters and clever plots.' AUNT AGATHA'S BOOKSHOP, ANN ARBOR US

LOVE LIES BLEEDING #8
'This cleverly-plotted tale has plenty of humour. It's another page-turner from Geraldine Evans and is crime writing at its best. A must for all lovers of the genre.' MYSTERY PEOPLE

Dead Before Morning First in the critically acclaimed Rafferty and Llewellyn mystery series
The naked body of a girl with no face and no name found in a place she had no business being proves the case from Hell for the newly-promoted Detective Inspector Joe Rafferty. So he could do without his ma presenting him with antoher little problem.

About the Series: Rafferty and Llewellyn Mysteries

Handicapped by a less than law-abiding family and a boss that would like nothing better than having him locked up, Detective Joe Rafferty still collars murderers on the side.

Reviews of Dead Before Morning by Geraldine Evans

You have subscribed to Smashwords Alerts new release notifications for Geraldine Evans.

You have been added to Geraldine Evans's favorite list.

You can also sign-up to receive email notifications whenever Geraldine Evans releases a new book.