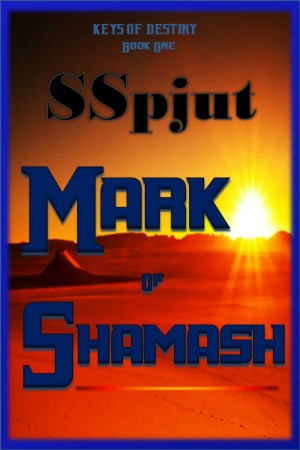 Mark of Shamash (Book One Keys of Destiny

Mark by the gods, rejected by the woman he loves, arrested, beaten and drowned by a man sworn to see him dead, Serac, a seer in the Temple of the sun-god Shamash, has less than two weeks to find an ancient artifact, stop a sorcerer from destroying the world, save the Anunnaki from from one of their own, and while he's at it, find and kill the demon who spawned him. More
Bastard born and demon-spawned, Serac, a diviner in the Temple of the sun-god Shamash, has just learned that the woman he loves is in love with someone else. Needing to put distance between himself and well meaning friends, Serac goes on a hunting expedition into the hills above Sippar, where he discovers an ancient sacrificial chamber, its walls covered in murals that are as familiar to him as the dreams he's been having about them since the day he was brought to the Temple as a child.

Pulled into the celli's stone walls by magic as old as creation, Serac wakes to find himself in the middle of a battlefield where he is captured by Imdugud, Warden of Babylon and the god Marutuk's son, then taken to an aerie high in the Zagros Mountains. It is there he learns about the Tablets of Destiny. Stones containing prophecies written by the god Anu and the Oracle of Kur. The first predicts the Anunnaki's destruction as punishment for using men in their age long battle against one another. The second, their salvation — but only if Serac can find the Tablets of Destiny and the Key that unlocks them in time, and to do that, he must first locate the chronicles of a man named 'Endar', Keeper of History, Recorder of Knowledge, and the only person who might have left a clue as to where the Tablets are located.

Tasked with helping Imdugud save the gods, Serac returns to the Temple where he is arrested, nearly killed, then coerced into helping the Captain of Sippar's Guard, a man who has sworn to kill him, find an ancient amulet and stop a sorcerer from using blood magic to summon a demon from the ABYSS. One he intends using to purge the Land of Kings of its priests and their corruption.

But finding clues to lost Tablets and ancient artifacts, are not the only things Serac needs answers to. Raped by a man she trusted then abandoned to raise his son alone, Serac's mother refuses to tell him who his father is or why her brother Mordecai wants Serac dead. Born with a birthmark believed by village shamans to be evidence that his mother's assailant had been a demon, Serac now hides the shame of his conception and birth under the robes of the NABU.
With only two weeks until SE KIN KU, when the portal into the ABYSS is at its weakest, and the sorcerer most likely to try to bring the demon through, Serac, with the help of his friends and the Librarian Emmi, search the Temple's Archives for clues not only on how to stop a sociopathic killer and redeem the gods, but how to free himself from a past that has the power to define his future, for good or evil — the choice is up to him. Or is it?

I grew up in the sixties and seventies in a Christian home, on a rural farm in Western Washington . As the second to the youngest member in a family of ten, my mornings were spent jockeying for bathroom time, while the afternoons were all about getting my chores done so I could watch Dark Shadows, Star Trek, and the Ed Sullivan Show.
Somewhere in and around the fourth grade my oldest brother, knowing my love of fantasy and dream of one day becoming an author, handed me a copy of The Hobbit and told me to read it. If I was really serious about becoming a writer, reading J. R. R. Tolkien was, as far as he was concerned, the place for me to begin.
I have been reading and writing every since.
"The Unforced Rhythms of His Grace" is my first completed faith-based, non-fiction work. And even though the first draft was written in less than three months, it wasn't until I began doing the re-writes that the book really began to come together as the thought provoking work I had always intended it to be. Based upon a mixture of life, theology, and an ever growing intimate fellowship with the Lord, I felt it was time to put on paper what I believe it means to live a life saved by grace.
I am currently in the process of my next faith based work, as well as a full length urban fantasy novel, and word prompted fantasy novella (a short novel comprised of a series of prompts taken from the writers group I am a part of). These will be updated to the list of available work as they are finished. In the meantime you can visit my website:

You have subscribed to alerts for Shawn Spjut.

You have been added to Shawn Spjut's favorite list.

You can also sign-up to receive email notifications whenever Shawn Spjut releases a new book.