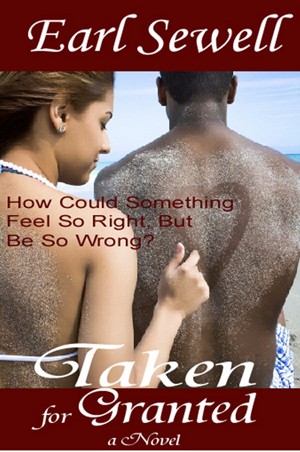 Rated 4.00/5 based on 1 reviews
Earl Sewell’s extraordinary novel is an unforgettable story about the chances we take and the possibilities that are waiting just around the next corner. More
Nina Epps got married too young, to the wrong man, for the wrong reasons. With her lazy, womanizing husband still trying to call all the shots and her grown daughter throwing away success for a no-account spouse, Nina’s quiet spirit is finally waking up, smelling the coffee and telling her to grab herself a big cup….if it isn’t already too late.

When Richard Vincent got married, he didn’t know it was a package deal---a wife, her freeloading sister, and an in-your-business, crazy –like-fox mother-in-law. To protect his son, the easygoing doctor has played “yes” man to his scheming family’s outrageous requests for years, until a final, devastating blow leaves him robbed of everything he’s ever thought he had.

Knocked sideways by life, Nina and Richard are looking for a way out, but what they find is a way in. Now they must both stand firm and face the difficult challenges ahead, and as hope grows ripe, they are about to discover love’s endless ability to heal and sustain when there’s no way of knowing what the next day will bring.

Earl Sewell was born in Chicago, Illinois and earned his degree in fiction writing from Columbia College of Chicago. Later, Sewell pursued his dream of becoming a published author. However, after receiving over forty rejection letters from New York publishing houses, he gave up on idea and in 1990 entered Corporate America.

Nine years passed before Sewell realized that he wasn’t living up to his full potential. His passion for writing was so overwhelming that he found it impossible to ignore his calling. He decided to take a leap of faith and start his own publishing company which he named Katie Books, after his late mother. He published his first novel in 1999 and sold several thousand copies of it locally. By 2001 he had a solid following and New York publishing houses were eager to purchase the rights to his work and distribute it nationally.

Sewell has written a total of seventeen novels over the past eleven years. His books have held steady positions on regional bestseller lists and have been featured in many publications, such as The Washington Post, Publishers Weekly, Upscale Magazine and Jet Magazine.

This was a good book it kept you going with all of the munipulation and controling ways. This story made you want to scream, shake the charaters and cry with them. This was a great story that left you wanting more.

You have subscribed to alerts for Earl Sewell.

You have been added to Earl Sewell's favorite list.

You can also sign-up to receive email notifications whenever Earl Sewell releases a new book.