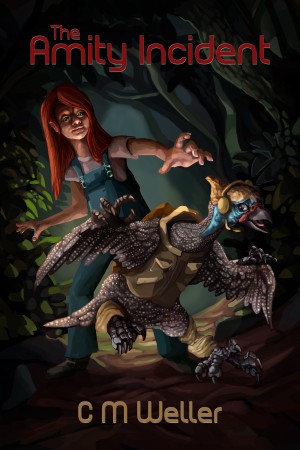 By C M Weller
Rated 2.00/5 based on 2 reviews
Exiled from her home colony into a hostile land of venomous, poisonous, and otherwise dangerous things, T'reka the Mad, humble scientist, must forge an unlikely peace with the most dangerous creatures in the known universe - HUMANS! [We're mostly harmless, we swear.] More
T'reka just wanted to learn. Unfortunately for her, her entire species views scientific thinking as a form of insanity. And when she wants to learn all about the various venomous, poisonous, and outright deadly life forms on a land mass named Toxic Island, you can almost see why. Little did she know that when she committed her life to the study of this strange and hostile land, there was already a colony of monsters setting up housekeeping. Now she's face-to-face with the most dangerous life form in the known universe, and desperately trying to forge peace with the horrible creatures twice her size and four times her weight! They call themselves... HUMANS! [We're mostly harmless, we swear.]
Available ebook formats: epub mobi pdf rtf lrf pdb txt html
First 5% Sample: epub mobi (Kindle) lrf more Online Reader
pdb
Price: $2.99 USD
Buy Add to Library Give as a Gift
How gifting works
Create Widget
Tags: adventure science fiction discovery exploration female protagonist alien viewpoint amalgam universe
About C M Weller

C M Weller has decided to keep their full identity a secret until such time as one of their works becomes a bestseller. They share a house in Burpengary East with two children, two cats, and a spouse who sometimes thinks they're insane.
Every October, C M Weller releases a free short story, in honour of both their birthday and All Hallow’s Read.
Unfortunately, this author has managed to avoid doing all the things that make author bios interesting reading. Sorry. However, ze has been publishing stories via Smashwords since 2012, and has an Amazon-exclusive novelette titled Free Baby.
This writer is allergic to almost all forms of alcohol (long story), too asthmatic to indulge in tobacco, and in possession of a body chemistry that makes the more interesting drugs problematic at best. Thusly, their chief addiction is their own imagination.

Reviews of The Amity Incident by C M Weller

I read this due to the interesting concept. It’s far left propaganda written by someone who has fallen for the very propaganda they preach. The main alien is at least an interesting character and gives a different viewpoint but that’s really it. Those were really the only parts I had any interest in. Gender, including the lack of set gender is a BIG deal the entire time and seems to ignore biology, which is a branch of science. Science which is a plot point and driver. Other than that it’s basically LBGT in your face almost all the time. So much so it hurts the storytelling. It’s slathered so thick it makes some parts painful to read. Almost none of the main human characters, especially the main character from what I can tell is the expy of the author show any growth as they are always right. The ending was like looking at a piece of modern art and not in a good way as I literally thought to myself “what the hell am I reading?”.

Great concept but that’s its only quality. Other than that there is just too much focus on gender, orientation no character growth and it just hurts everything else. The only reason that this is not 1 star is because some parts of the story are actually fair to good. The aliens research and interactions with human characters are some of the better parts since the LBGT stuff tends to not be brought up. In fact if the LBGT stuff was not brought up so much so often and wasn’t driving the plot so heavily this would be a much better read.

This is an LGBT+ propaganda piece. As in, you get to listen to the characters preach their "sexual tolerance" ALL THE TIME. You get a baby who is unironically non-gendered (the author doesn't even notice the hypocrisy of the scientists identifying animals genders, but being unwilling to notice what a human baby clearly is), a celebration of a gendering / coming out day for another character, a polygamic relationship, and, in the end, you find out that the entire story is actually supposed to be a metaphor for coming out of the closet. If you agree with the author's politics, then you also must enjoy having your views preached at you in order to enjoy this book.

Outside of that issue, the books has some cringe-worthy choices. For example, the main human character does not start out as like-able (she is arrogant and too mature for a realistic depiction of her age), nor does she experience any growth over the course of the story. She doesn't learn anything (outside of academic, intellectual pursuits, such as the alien language). As an example of a weird plot device, the main character is taken before the strict Colony Council in order to defend her choice to cut a path through the jungle in her free time (why would the council care? We aren't told.) In a stunning move of "brilliance" this child declares that she is making a path to the sea and that the colony needs salt! It's again unclear why not a single adult could make this logical leap, but as soon as our heroine says this, the entire colony drops almost everything in order to go after the precious salt. This is just one example of a plot device that seems designed to uplift a heroine as a perfect example of humanity (she is given no flaws by the author), but only at the expense of all the other characters around her.

The author also has a frustrating tendency to forget prior details in the story. For example, the colony size starts out at 700 people, but is later changed to around 500. The leadership of the colony is designated at at times "no leader", "lead by a council", "lead by a lottery winner". Giant trees are introduced early in the story, and focused on as significant, then dropped. Same with a bully, who serves to highlight the author's gender agenda, then suddenly is "reformed", then completely dropped from the story.

On the positive side, the alien is genuinely interesting, and the contrasts with this creature and the humans can be interesting. It got tedious due to the fact that the humans were always perfect and idealized (apparently there are no such things as selfish people in this utopia of tolerance). There are no "grey" characters or moral ambiguity allowed. The bad-guys are totally evil while they are being bad and the good guys are always perfectly angelic.

Despite the flaws, this isn't the worst thing ever written. Again, if you agree with the author's political views, it might be worth getting. But I've read better fanfiction and can't in good conscious recommend this.

(reviewed 2 days after purchase)
Jfauch reviewed on Dec. 14, 2019
(no rating)
Can't believe i got suckered into buying this drivel.
Was expecting HFY type story since it was linked from HFY reddit. instead i get woke tumblerina gender bender BS...bleh this is garbage.

Its badly written as well with stilted language and wooden characters.

You have subscribed to alerts for C M Weller.

You have been added to C M Weller's favorite list.

You can also sign-up to receive email notifications whenever C M Weller releases a new book.