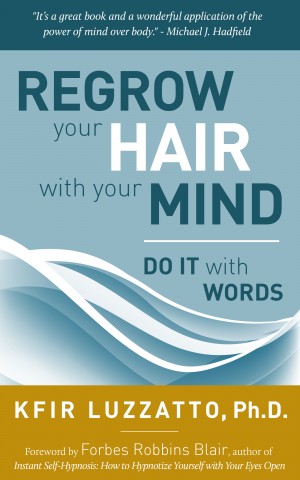 Do It With Words: Regrow Your Hair with Your Mind

By Kfir Luzzatto
"Do It With Words" is a straightforward guide into the power of your mind. The author, a former skeptic, who reformed after witnessing how mind-body practices deliver tangible results, provides visual proof and a precise blueprint to the mind-body experiment in which he succeeded in his attempt to regrow lost hair and to restore its natural color to gray hair. More
Regrow Lost Hair and Restore Its Natural Color to Gray Hair - Do It With Your Mind
Do It With Words - No "Magic" Potions or Lotions Needed

You can make changes to your body with your mind? What nonsense! Snake oil! B-S! That’s what some people will tell you. So let me show you in a few seconds how wrong they are.

Close your eyes. Imagine looking at a juicy half lemon that you hold in your hand. Now imagine squeezing it and seeing its juices flow. When you start salivating, open your eyes and go on reading.

You just saw how your mind affects your body and turns your salivary glands on. It can also make you hair follicles go back to work.

Let’s be realistic: The method taught in this book will not give you back the same thick hair that you had in high school. Hair loss and graying is a natural process. We can slow it down, reverse it to some extent, but we cannot make it go away altogether. If you are reading these lines, it means that you are worried because you are losing hair or graying fast, and the first thing to do is to stop that process. Too many people make money by selling useless preparations; they don’t want you to hear a simple secret: You already hold the power to make it better. You just need to learn how to use it.

If you carefully follow the technique taught in this book, hair loss will stop or significantly slow down. Then, you will see hair growing back in places where it had stopped growing a long time ago. You can also restore color to your hair, which may not be exactly the color you had in your teens (mine grew of a color darker than before), but it will look and feel better, and so will you.

You already have what you need to succeed – your mind. You don’t have to buy anything or to concoct any “magic” potion. You must understand how your mind communicates its orders to your body, and learn how to make this channel of communication work to improve the health of your hair. In fact, as you will see when you read the book, this is a particular application of a general principle that you can exploit in many other areas.

But I want to be very clear: There is no magic wand in the book. Achieving a positive result requires a will to succeed. Your mind runs your body and you have to learn how to put it to work for you. The good news is that when you begin to use the techniques taught in the book, you also start to reap benefits immediately, which adds to your motivation to succeed.

Two highly respected practitioners in the field expressed their opinion of the value of this technique:

“It’s a wonderful application of something that I have believed in for many years now – the power of mind over body . . . This technique is worthy of serious attention.” - Michael J. Hadfield, D. Hyp., MBSCH

“Kfir Luzzatto . . . has laid down a path for you to reach many goals traditionally considered difficult or impossible. I see Kfir as very much a visionary pioneer in the mind-body field. We are fortunate to read what he has discovered and reveals . . .” - Forbes Robbins Blair

Do It With Words is a straightforward guide into the power of your mind. I am a former skeptic, who reformed after witnessing how mind-body practices deliver tangible results. The book provides visual proof and a precise blueprint of the mind-body experiment in which I succeeded in my attempt to regrow lost hair and to restore its natural color to gray hair.

The book describes in precise detail how I:
• regrew lost hair;
• restored its natural, dark brown color to my previously white hair;
• used self-hypnosis, guided imagery and meditation to achieve all results without the aid of any external preparation.

Scroll up and grab a copy to start learning today how it is done.

Kfir Luzzatto is the author of nine novels, several short stories and six non-fiction books. Kfir was born and raised in Italy, and moved to Israel as a teenager. He acquired the love for the English language from his father, a former U.S. soldier, a voracious reader, and a prolific writer. Kfir has a PhD in chemical engineering and works as a patent attorney. He lives in Omer, Israel, with his full-time partner, Esther, their four children, Michal, Lilach, Tamar, and Yonatan, and the dog Elvis.

Kfir has published extensively in the professional and general press over the years. For almost four years he wrote a weekly “Patents” column in Globes (Israel’s financial newspaper). His popular guide, "FUN WITH PATENTS—The Irreverent Guide for the Investor, the Entrepreneur and the Inventor", was published in 2016. He is an HWA (Horror Writers Association) and ITW (International Thriller Writers) member.

You have subscribed to alerts for Kfir Luzzatto.

You have been added to Kfir Luzzatto's favorite list.

You can also sign-up to receive email notifications whenever Kfir Luzzatto releases a new book.