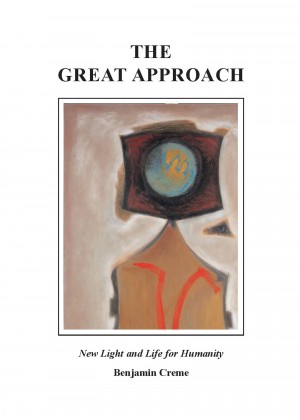 The Great Approach: New Light and Life for Humanity

By Benjamin Creme
Addresses the problems of our chaotic world and its gradual change under the influence of the Masters of Wisdom, who are returning openly to the world for the first time in 98,000 years. An extraordinary synthesis of knowledge, it throws a searchlight on the future and reveals amazing scientific discoveries which lie ahead. More
Avid readers of Benjamin Creme's writings eagerly await this new chapter in the unfolding 'biggest story in history': the gradual return to everyday life of Maitreya, the World Teacher, and the Masters of Wisdom. Known publicly for well over a century, these advanced spiritual teachers — the custodians of humanity's evolution on planet Earth — are quietly taking their places to live and work openly among us.

In The Great Approach, Creme carefully introduces the subject to first-time readers as well. What is it like, he asks, for a Master of Wisdom to return to live amidst the cacophony and chaos of the modern, everyday world? Even if we cannot comprehend the immensity of a Master's consciousness, can we imagine returning to the polluted city after an extended stay in a pristine retreat?

The ninth in a series of books by the British esotericist, artist and author, this non-fiction work describes in simple yet profound terms the implications of this great event, not only for humanity but also for the Masters themselves.

In this potent book, we become aware of the Masters' vision of the rich and fulfilling life ahead for humanity that will result if we heed their counsel and transform ourselves and our institutions. It presents their blueprint for creating a fair and viable economic order and a world free from want and war.

We preview remarkable scientific advances including a new source of unlimited energy soon to be discovered, some of the revolutionary medical and environmental benefits that will result from its use, and the true role of genetic engineering.

We explore the possibility of people everywhere awakening to their true inner nature, beyond the grip of fear and conflict.

Within the near future, Benjamin Creme affirms, a new and expanded consciousness will gradually unfold. Commercialization and the thralldom of greed will wane, pollution and the scourges of disease and poverty will abate, and civilization as we now know it will be transmuted utterly. In explicit detail, he explains how and why.

The Great Approach is the sure voice of the future, written to guide and inspire us, to show us the nature of the time immediately ahead and beyond, to set us anew on the journey to our birthright, that of divine beings inhabiting a sacred planet.

Read this book and rejoice: an heroic future is ours to claim and build under the inspiring presence of the great Teachers who now walk among us.

A lifelong student of the Ageless Wisdom teachings -- first made available to the public in the late 1800s by H.P. Blavatsky and later by Alice A. Bailey -- Benjamin Creme traveled the world for more than 30 years informing people that the greatest event in history is now unfolding. Humanity's Elder Brothers -- the Masters of Wisdom -- are once again among us. Soon these ancient guardians of the human race will be working openly at our side, showing us how to live together in peace -- with sharing, justice and Earth stewardship as the keynotes of a new civilization.

In 17 inspiring and provocative books, Creme reveals an ever more detailed picture of humanity's destiny, both worldly and spiritually. "We are talking about nothing less than the total transformation of every aspect of our lives", he says. Creme's message is both profound and immensely practical. Each book covers a vast range of topics: from meditation and the growth of consciousness to political and economic change, from initiation and group work to ecology and world service. Compelling explanations are offered for the ever-increasing 'miraculous' or unexplained phenomena such as weeping Madonnas, crosses of light, healing waters, crop circles and UFOs. Creme also clarifies misunderstandings about the antichrist and the 'last judgment'.

In close contact with, and trained by, a Master of Wisdom since 1959, Mr. Creme had access to constant up-to-date information on the progress of Maitreya's emergence and the total conviction necessary to present that information to a skeptical world. He was chief editor of Share International, a monthly magazine read in over 70 countries that addresses Maitreya's emergence as well as the changes that are both needed and actually occurring in every field of endeavor to bring about a more just and compassionate global society.

Until his 90s, Creme lectured by invitation throughout Europe, North America and the Pacific Rim, and was regularly interviewed on radio and television. He received no remuneration or royalties for this work and made no claims about his own spiritual status. His books have been translated and published in numerous languages by groups worldwide who have responded to his message.

"My task," Creme said, "has been to make the initial approach to the public, to help create a climate of hope and expectancy into which Maitreya can emerge without infringing our free will."

Benjamin Creme made his transition on October 24, 2016, but his work continues through a network of worldwide groups.

You have subscribed to alerts for Benjamin Creme.

You have been added to Benjamin Creme's favorite list.

You can also sign-up to receive email notifications whenever Benjamin Creme releases a new book.