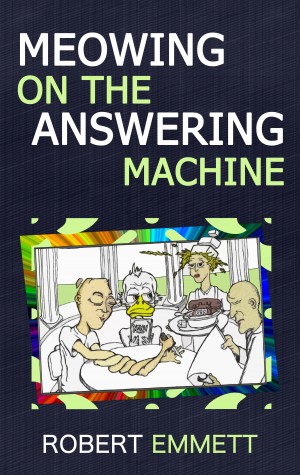 By Robert Emmett
‘Meowing on the Answering Machine’ is a collection of short fiction and prose by Robert Emmett. Forty-two short works spanning twenty years, with several drawings throughout to fill the margins and give spice to the words. Hilarious and spooky, absurd and authentic. More
"PURR!" ~Tessa B. Dick (Raised by cats; author of Philip K. Dick: Remembering Firebright)

"Place all beverages on a flat surface, and sallow whatever you're eating or drinking before you begin reading... you're liable to lose it if you don't."
~ Ted Atoka (author of Fiammetta's Dream, book ii of the Villa Paradiso Series)

‘Meowing on the Answering Machine’ is a collection of short fiction and prose by Robert Emmett. Forty-two short works spanning twenty years, with several drawings throughout to fill the margins and give spice to the words. From Dafne to Dangle, from food that cooks itself to the talking furniture in search of identity. Hilarious and spooky, absurd and authentic. All your favorite tales from the often odd world of Robert Emmett are offered together for the very first time!
Available ebook formats: epub mobi pdf rtf lrf pdb txt html
First 20% Sample: mobi (Kindle) lrf pdb Online Reader
Price: $0.99 USD
Buy Add to Library Give as a Gift
How gifting works
Create Widget
Tags: short fiction comedy humor chicago science fiction weird surreal bizarro speculative robert emmett
About Robert Emmett

Robert Emmett creates odd but familiar worlds and fills them with a bizarre cast of characters attempting the impossible.

He has spent most of his time around Chicago, making strange art and playing in loud experimental rock bands.
.
His stories usually come from the fringes of reality and carry a humorous and dreamlike feel. He cites Philip K Dick, Salvador Dali and David Lynch as influence and inspiration for his writings: fairy tales for the Internet age, bedtime stories for weird children.
.
He recently released his first book, a collection of short fiction and prose, called 'MEOWING ON THE ANSWERING MACHINE', and continues creating his unique brand of weirdness for this all-too-normal corner of reality.

He began creating at a very early age. Drawings and Poems gave way to Song-Writing and Short Stories, and then essays, Novels and the occasional Manifesto.

You have subscribed to Smashwords Alerts new release notifications for Robert Emmett.

You have been added to Robert Emmett's favorite list.

You can also sign-up to receive email notifications whenever Robert Emmett releases a new book.