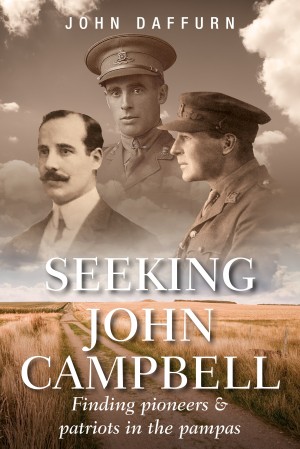 Seeking John Campbell: Finding Pioneers and Patriots in the Pampas

By John Daffurn
Amateur genealogist John Daffurn discovers the remarkable family histories of three John Campbells, one of whom could be the father of the illegitimate Isabel whose name was randomly plucked from a UK government list of unclaimed estates. If Isabel's father can be identified will living heirs, who could claim her estate, emerge? More
Isabel's name was randomly plucked from a government list of over 10,000 individuals, who had died intestate. Her details were used, by amateur genealogist John Daffurn, in an attempt to discover why professional heir-hunters had failed to identify her living heirs. Isabel had died in 1995 and his search quickly established that she had been born in Argentina and that her father was John Campbell, a rancher. However, three John Campbell's emerged as potential fathers for Isabel and in the process the remarkable histories of these three families were uncovered. From Prussia and the lowlands of Scotland to the pampas of Argentina and the trenches of the Somme, their stories unfolded, as the attempt to identify the father of the illegitimate Isabel continued. In a show of patriotism each of the John Campbells or their children returned from Argentina to fight for the British in both World Wars, and documents unearthed told of families being torn apart by war and of the inevitable death and suffering of those involved in conflict. Seeking John Campbell follows the three families, from the early Scottish migrants to Argentina in 1825 to the end of World War II, as John seeks to identify Isabel's father and discover any living heirs.
Available ebook formats: epub
Price: $4.99 USD
Buy Add to Library Give as a Gift
How gifting works
Create Widget
Tags: world war ii scotland argentina world war i family history genealogy heirhunting monday club scots in argentina
About John Daffurn

After a lifetime within the pharmaceutical and biotechnology industries, including postings to Belgium, France, the Netherlands, Switzerland and the USA, retirement enabled John to devote time to his passion for train travel, genealogical research and creating awareness for his favoured charity DebRA. In 2010 John travelled solely by train from his home town in the UK to Ho Chi Minh city in Vietnam and raised some funds for DebRA. This was topped in November 2013 when he broke the Guinness World Record for the greatest distance travelled by train in 24 hours in China.
John's interest in genealogy started many years ago in Bristol where, whilst spending hours at its Central Library studying towards his accountancy qualification, he had a choice of many other fascinating books - ideal for distraction therapy! In the History of Worcestershire John discovered an ancestor from the 1600s, John Dafforne, and this led to a lifetime of interest in his own family history.

More recently he decided to dabble in heir-hunting whch by accident led him to discover the fascinating family histories of three John Campbells in Argentina which became the catalyst for his first book, Seeking John Campbell: Finding pioneers and patriots in the pampas.

Reviews of Seeking John Campbell: Finding Pioneers and Patriots in the Pampas by John Daffurn

You have subscribed to Smashwords Alerts new release notifications for John Daffurn.

You have been added to John Daffurn's favorite list.

You can also sign-up to receive email notifications whenever John Daffurn releases a new book.