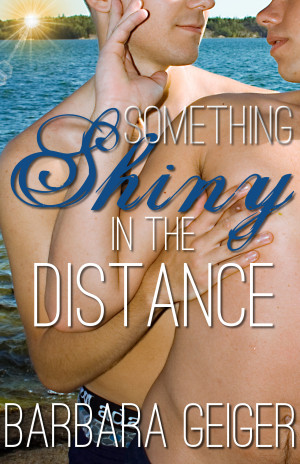 Something Shiny in the Distance

A selkie and a drag queen walk into a wildlife preserve cabin… and a long forgotten debt brings two strangers together to save a life. More
Finn doesn’t know if all mythical shape-shifting seals are drawn to bright, shiny things, but it’s definitely one of his weaknesses. Something has been drawing him home to Victoria all week, but when he spots a flash of light on one of the islands off the BC coast, he realizes that what’s been calling him isn’t home at all.

Ren has always known that he’s going to die young, and has lived his life accordingly with all the glamour and flair he can possibly cram in, both in and out of drag. He can feel the end coming near, but his grandmother once told him that when death was creeping up, to go to the beach and let his presence be known. The silver sequined gown that’s catching the light might not be his best dress, but it’s definitely his shiniest.

Larger powers are at play than a lone selkie and a fabulous marine biologist could ever know, and a passing encounter may just be what they both need, for a glimpse of hope and a second chance before time runs out.
Download: epub mobi (Kindle) pdf more Online Reader
lrf pdb txt
Price: Free! USD
Add to Library
Create Widget
Tags: romance gay adult paranormal glbt shapeshifter drag queen selkie crossover characters
About Barbara Geiger

Barbara didn’t learn that she had lived in three out of the four Northern Alberta towns that had a known or suspected Wendigo attack until well after she’d moved south to Lethbridge. She grew up loving ghost stories and pony books, and spent most of her summers on the British Columbia coast, where she fell in love with the ocean.

You have subscribed to alerts for Barbara Geiger.

You have been added to Barbara Geiger's favorite list.

You can also sign-up to receive email notifications whenever Barbara Geiger releases a new book.