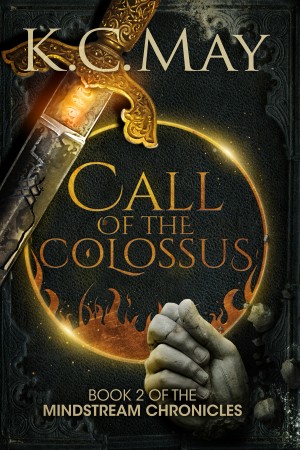 Call of the Colossus

By K.C. May
Driven to protect her only remaining brother, condemned murderer Jora must covertly investigate the dark and hidden forces smuggling the life-giving godfruit to Serocia’s enemies and perpetuating the war. She learns to call the Colossus, the ancient warrior statues that once battled the Gatekeeper. Can she convince them to help her, or will they side with her enemy and use her brother against her? More
Book 2 of The Mindstream Chronicles

Condemned murderer—and now Gatekeeper—Jora Lanseri is offered a chance at redemption in exchange for her silence. Driven to protect her only remaining brother, she must covertly investigate the dark and hidden forces smuggling the life-giving godfruit to Serocia’s enemies and perpetuating the long and bloody war.

Aided by the dolphin Sundancer, Jora discovers more long-forgotten secrets of the Spirit Stones—including the ability to call the Colossus, the ancient warrior statues positioned around Jolver. But the Colossus warriors had fought against the previous Gatekeeper in the war known as The Great Reckoning. Can Jora convince them to join her struggle for peace and justice, or will they side with her nemesis and use her brother against her?
Available ebook formats: epub mobi pdf
First 15% Sample: epub mobi (Kindle)
Price: $0.99 USD
Buy Add to Library Give as a Gift
How gifting works
Create Widget
Tags: adventure fantasy adventure demigods dolphin language war action adventure fantasy about a dolphin
About K.C. May

Hi! I'm K.C. May. Thanks for visiting my author page.

I grew up in the mid-western USA and in Hawaii, and earned a B.A. in Russian from Florida State University. After a year in Taiwan teaching English and studying Mandarin Chinese, I lived in the Arizona desert where I founded a Rottweiler rescue organization and worked as a computer programmer and technical writer. My interests include karate, backpacking, motorcycle riding, dog training, and computer gaming. In 2010, I retreated to cooler, greener Georgia. I earn my living as a full-time writer.

My first novel, The Kinshield Legacy, was initially published in hard-cover in 2005. Now it's available as an eBook and in paperback. It was named one of the four best reads of 2010 by review blogger Grace Krispy at DailyCheapReads.com.

If you enjoy that book, you will probably like the rest of the series -- The Kinshield Saga. I also write science fiction, and I've started a new series called The Mindstream Chronicles.

I hope you enjoy my stories!

Learn more about K.C. May

About the Series: The Mindstream Chronicles

Jora has the uncommon ability to enter the Mindstream to witness any event in the present or past. After beginning her training as a Truth Sayer in the Order of Justice Officials, Jora witnesses a shocking crime. Aided by the dolphin Sundancer, Jora begins a dangerous quest to bring the culprit to justice, but the deeper she probes, the more she learns that greed and corruption hold benevolence hostage.

Also in Series: The Mindstream Chronicles

Reviews of Call of the Colossus by K.C. May

You have subscribed to alerts for K.C. May.

You have been added to K.C. May's favorite list.

You can also sign-up to receive email notifications whenever K.C. May releases a new book.