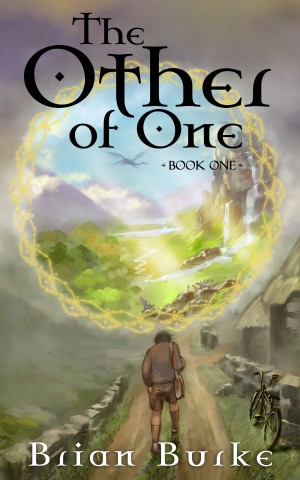 The Other of One: Book One

There he meets a community of Imps who are seeking refuge from a Wrythunn most foul, Drevol Briggun.

Being the reincarnation of the only other Wrythunn in existence who has the potential to confront Briggun's power, it is up to William to assassinate him. For not only is Lythiann under threat, but his own world is too...
Download: epub mobi (Kindle) pdf more Online Reader
rtf lrf pdb txt
Price: Free! USD
Add to Library
Create Widget
Tags: fantasy magic magicians celtic foklore monsters adventure dragons adventure fantasy magic adventure story magic wizards fantasy about a mythical creature
About Brian G. Burke

Born in Waterford, Ireland, in 1981, I later moved up to Galway in '88. There I attended St. Pat's primary school before serving my five year sentence at St. Joseph's secondary.

I sat my leaving-cert in 1999. Rivetting stuff...enough said! Let's just say, Medicine was well n' truly out the window, as was shoe-shining. Not that there's anything wrong with that, it's just not my dream scenario.

I hated school-work you see. Hanging out with my friends in the yard, smoking, was one thing, but when it came to studying..."no thanks, the tv could use some company."

In hindsight, this could very well have been my inspiration for William. Thankfully there were no Blackheads or Ms. Cleavers gracing my school halls, though there were some close alternatives...

But not all my subjects made me want to rip fistfuls of my hair out and use it for earplugs. English appealed to me very much. Why? Because English involves writing. And the only ingredients writing requires are passion, patience, and imagination. Not foreign languages or algebra (unless you want to include them, if that's your thing)

It was my guilty pleasure. I used to love 'pushing the envelope' when essay-day arrived. Not out of some twisted enjoyment for the dark and demented things I sometimes wrote about. It was more a case of me wanting to be more original than everyone else. I was always competitive that way.

After my five year stretch, I got out on bail with my mediocre result card, and actually continued to write. This surprised even me. I wrote short stories, the odd poem, and even a few songs. God-awful ones, but I tried it nonetheless. Writing is writing after all - be it a Facebook status or a 1000 page novel.

It was only in October 2002, did my little writing hobby really change the course of my life. I'd begun working on a fantasy called 'Kaddareth'. In the meantime I was doing a creative writing course at Kilroy's College, Dublin.

I learned a lot during that course. My tutor, Eileen Casey, was especially supportive. A true model for aspiring writers, and she is an extremely talented author and mentor to many, having written such works as 'Snow Shoes' and 'Drinking the colour blue'.

However, I will never forget the day I was asked to present them with the opening pages of a sample novel.

Thinking nothing of it, I began...

I wrote through the night. Red Bull cans scattered about my desk lamp. By the time I was done, I was well beyond the assignment's word allowance. The idea was just too vast for a simple 1,500 word exercise. But I liked what I'd written so much that I didn't want to just send it adrift, nor could I edit it because the details were just too damn essential to the plot. So I contacted the college the following morning and asked if I could exceed it, just this once - with sugar on top. As expected, no such permsission was granted, which was perfectly fair (and to this day I'm glad!)

So I put that story to one side, submitted some other 'thrown-together' piece, and straight-away returned to the other.

That piece was the beginnings of 'The Other of One'...

I have since ditched Kaddareth and have continued on this course; adding on further installments to (what has become known as) 'The Other of One' series as I go. Best of all, it has been so well received! And with a little luck, even more people will get to read it in the future. People like you. I only hope you enjoy it as much, because if you do, then I will have a whole other world waiting for you to explore...

Great epic fantasy based largely upon Irish tradition and folklore, but in a totally original way. Though I am not the greatest fan of the author's particular narrating style, I think this series has the potential and power to redefine European epic fantasy in many ways.

This is an epic fantasy story that takes readers on a wild and imaginative adventure. It had incredible imagery and descriptions, great character development and distinctions, and it was quite humorous. I felt that there was an overabundance of commentary and monologues though, which took away the excitement of action scenes and the forward momentum of the story. Sometimes humor was added where I felt it didn't belong - there would be an epic battle scene, but then a joke would be made which would take away from the gravity of the situation, thereby reducing the excitement and/or horror. As awesome a world this was, sometimes it felt like there were way too many added fantasy details, and I felt like the characters were speaking a foreign language. Despite these few negative points, it was an amazing and entertaining adventure that I very much enjoyed, and I look forward to book 2.

I love this story! I can't wait for the next one. Keep writing. I read a lot, and am a huge faf of Robert Jordan, and Brandon Sanderson. Your characters are good,and eventually I see you developing them even more.

You have subscribed to alerts for Brian G. Burke.

You have been added to Brian G. Burke's favorite list.

You can also sign-up to receive email notifications whenever Brian G. Burke releases a new book.