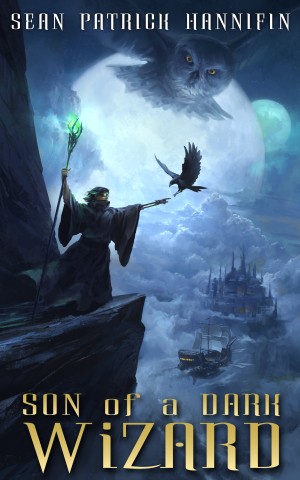 Son of a Dark Wizard

Sean Patrick Hannifin has been writing for most of his life. His earliest stories were penned at the age of five, when he would draw stick-figure pictures and dictate the accompanying words to his parents. These stories usually began with the words, "Once upon a time there was a happy little boy with an umbrella." With a lack of artistic skill, these umbrellas often resembled giant lollipops. Fortunately Sean's interest in umbrellas was soon replaced with a fascination for dragons and dark wizards. Fantasy films from the 80's, such as The NeverEnding Story, The Dark Crystal, and the somewhat obscure Mio in the Land of Faraway, helped found a life-long love for dark and mysterious worlds full of wizards and castles, vast landscapes filled with stories and secrets.

When he's not writing, Sean composes orchestral music inspired by film scores, classical music, and thoughts of dragons and wizards. He also enjoys programming, watching movies, playing video games, browsing bookstores for long lonely hours, exploring ancestors on the family tree, and baking (then devouring) too many cookies at Christmas.

Sean studied Computer Science at George Mason University, then went on to study computer animation at the online school Animation Mentor. But neither of these pursuits led to anything he wanted to do for a living; he always finds his interests turning back to storytelling and world-creating.

Reviews of Son of a Dark Wizard by Sean Patrick Hannifin

Kids really can do a lot ! (Obviously if they can become wizards and do magic)

Nice twist in the end... a bit unexpected. Would like some background on the characters (maybe a prologue in which it should have been described). Or writer left these hanging deliberately so that he can use them in sequel.

More than I expected; well written and engrossing. Not your usual coming of age story. The protagonists are children, but not simpletons. It's all about maturity and the right use of power. There is some nice description in the hunt for the rire (yes, that's its name). Looking forward to the sequel.

You have subscribed to alerts for Sean Patrick Hannifin.

You have been added to Sean Patrick Hannifin's favorite list.

You can also sign-up to receive email notifications whenever Sean Patrick Hannifin releases a new book.