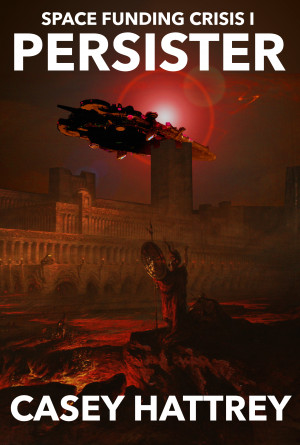 By Casey Hattrey
Rated 3.80/5 based on 5 reviews
A lot can go wrong in six months of chryosleep, and Dr. Karen Arianne has been under for 153 years. Even worse, the most powerful force in the galaxy, the Central Academic Funding Council Administration, now has application forms so long they come with embedded therapy. But before she can worry about that, Arianne will have to find out why so many cultural evolution researchers are being murdered More
In theory, getting funding for research in the 45th century is easy. You just fill in a few thousand forms and send it to the most powerful force in the galaxy - the Central Academic Funding Coucil Administration. However, the bureaucracy induced by the vast distances of outer space mean that decisions take so long that the only sensible solution is chryogenetic freezing. However, Dr. Karen Arianne did not expect to be frozen for 153 years. In that time, all space-hell has broken loose, and she now has as much chance of getting a job as a space wolf in galaxy town. Also, idioms seem to have changed a bit in a century and a half. Come to think of it, so has everyone's language and culture.

She has been woken from chryosleep to solve a mystery. Someone is murdering people who study cultural evolution, an important field in a pan-galacitc community where languages change faster than messages take to reach their destinations.

Who would want to kill researchers? Can she trust the Administration? What are the mysterious Bloggeration planning? Will she ever get a job?

Satire that puts the pace in space opera and the fun in academic funding application. And the itch in hyper-niche.

Casey Hattrey writes in airports and train stations between working as a researcher in the social sciences.

Review
WabbitSeason reviewed on May 16, 2018

Reading this was... interesting? Surprising? I don't really know how to describe it. Some parts of the book allow the reader to briefly entertain the illusion that the story even remotely resembles a normal SF work. The rest appears mostly to be the author indulging in pondering the field of cultural evolution and making fun of the academic world surrounding it. With success, as far as this layman can judge. At least it made me laugh out loud on various occasions. The scene in Sura's lab, however, was unexpectedly thrilling. All in all, it appears to me that there is true writing talent at work here, albeit in the service of... well, venting would be my best guess. Still, I have been entertained, my horizons were broadened slightly, and I have been strengthened in my conviction that I dodged a bullet by avoiding academic research as a career. I tip my hat to you!

Very entertaining, witty and eloquent. I can't wait for the next one!

It's funny (especially if you like Douglas Adams of "The Hitchhiker's Guide to the Galaxy" fame) and relatively well-written for a début, but that's not the point (I mean if you expect a Nobel prize for literature contender or a gripping global story like Stepehen Baxter's Flood then better not even start reading it!).
The point is that academia is in crisis and (contra James Jenkins' review) this is *real* (I'm a practising scientist myself) and it does *matter* for society (at least I hope so, otherwise why would we spend so much effort?) and this book builds upon this real crisis to produce a deeply disturbing future scenario: maybe this is the right way to make people aware of what's going on?
But not even that is the point! I think the deep message (which Casey explicitly makes towards the end) is that academia's issues (of which funding is but one) are simply a reflection of our society’s wider issues. In the end, we academics are not isolated in an ivory tower (despite what many believe) but part of society, and we respond to its needs and ideals (because we want or because we have to) science being, in the end, just a mirror of society's own image.
So if you don't like how science looks, what it seems to be doing and what is produces (well, we don't either in many instances), before blaming us (we're just humans in the end) ask yourself what are the root causes: maybe it's because we are forced to provide sexy (sometimes literally), revolutionary, amazing new discoveries that will change the face of the Earth (and beyond) every day, so that we can have the (meagre) funding to actually do the work that might -- just might -- make people's lives better, more fulfilling, worth living?
Science is in crisis but then what's not?

I enjoyed this book, a lot. The whole thing. You might too. The trends projected are plausible, if adsurd. This is life bogging down in its complexity.

I read 12% before putting this book away. I found the premises unrealistic and too centered on academics to be believable.

You have subscribed to alerts for Casey Hattrey.

You have been added to Casey Hattrey's favorite list.

You can also sign-up to receive email notifications whenever Casey Hattrey releases a new book.