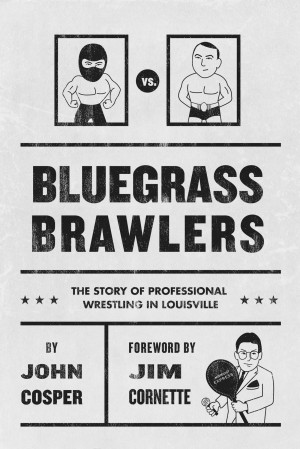 By John Cosper
Louisville, Kentucky has always loves pro wrestling. From the 1970s through the 1990s the Louisville Gardens was packed every Tuesday for Memphis wrestling, and in the early 2000s Louisville became the home of the WWE's developmental program. Bluegrass Brawlers tells the full history of pro wrestling in Louisville, from the early pioneers of the 1880s to today's indy wrestling scene. More
As the Attitude Era drew to a close in the early 2000s, the WWE already had an eye to the future. The stars who would succeed the Rock, Stone Cold, and the Undertaker were already well on their way to the big time, and Louisville, Kentucky had a front row seat to the future.

They were all here – Cena, Orton, Batista, Lesnar. They were all on display every Wednesday night for free at Ohio Valley Wrestling’s Davis Arena. Alongside established stars like the Big Show and Mark Henry, the Superstars of Tomorrow trained under the watchful eye of Jim Cornette and Danny Davis, waiting for their moment. More would follow in their footsteps. Some were already close by, like the brash young heel lighting it up every week for Southern Indiana’s IWA Mid-South promotion, CM Punk.

As stunning as that time in history now appears, it was only one of many golden wrestling eras for Louisville, Kentucky, a city that has always loved its fight sports. “Bluegrass Brawlers: The Story of Professional Wrestling in Louisville” covers them all, from the earliest days when wrestling was king to the vibrant independent scene of today. Beginning in 1880 with tales of circus stars and barn-storming grapplers, “Bluegrass Brawlers” chronicles the evolution of a sport and the city that embraced it.

Louisville was one of many towns to play host to William Muldoon, the “solid man of sport” and the first true professional athlete in American history who proved to be the first true villain in Louisville wrestling history. Louisville bore witness to the first golden age of the sport in the years leading up to World War I. Top stars like Joe Stecher, Charlie Cutler, and the Zbyszko brothers all wrestled on stage at the opera house, and the sport’s first true superstar gained the name that would make him famous here – Ed “Strangler” Lewis.

Promoter Heywood Allen made weekly wrestling a local tradition in the late 1930s, playing host to world champions like Orville Brown, Cowboy Bill Longson, Lou Thesz, and Mildred Burke. Louisville also saw a number of masked men, freaks, and novelty acts pass through town as well as weddings, and alligator, and the legendary Ginger the Wrestling Bear. Allen was one of many promoters to bring African American stars to prominence, including Louisville’s own “Black Panther” Jim Mitchell.

In the 1960s Louisville saw the in-ring debut of the greatest manager of all time, teenage Bobby Heenan. Then in 1970 Louisville became the number two town for the hottest promotion in the country, Jerry Jarrett’s Memphis Wrestling. For more than two decades the city thrilled to the Tuesday night showcases starring Jerry Lawler, Dutch Mantell, Bill Dundee, and dozens more. Louisville also became part of the proving ground for future stars like Hulk Hogan, Randy Savage, Sting, the Ultimate Warrior, the Undertaker, Kane, the Rock, Stone Cold Steve Austin, and the Louisville Slugger, Jim Cornette. “Bluegrass Brawlers” covers it all, from 1880 to 2014.

Through newspaper accounts, biographies, documentaries, and personal interviews, author John Cosper compiled the story of a city, a sport, and the unique impact both had on one another. The book also includes an introduction from Jim Cornette, more than 60 photos, and a final word from John Cena’s former manager, Kenny “Starmaker” Bolin. “Bluegrass Brawlers” is a must read for wrestling fans, sports fans, fans of the great city of Louisville, and anyone who can appreciate a good tall tale.

John's writing career began in 1994 when he took on the role of drama leader for his church's youth program. Later that year, he founded Righteous Insanity, a drama publishing company providing skits, plays, and writing services to churches around the world. In 2011 John became a kids ministry curriculum writer for Minister's Label, creating skits, games, lessons, and more for childrens-ministry-deals.com.

As time went on, John expanded his creative endeavors to film, web media, and his first love, science fiction. His credits include two feature films, multiple TV and web programs, and dozens of short films including the award winners "The Telemarketer," "Tolerance," and "Bots."

"Sci-fi is a great vehicle for exploring matters of faith." says the writer whose influences include Douglas Adams, George Lucas, Joss Whedon, Philip K. Dick, C.S. Lewis, and Isaac Asimov. "It also allows you limitless opportunities for creativity and humor."

When he's not writing, you're most likely to find him spending time with his wife and kids.

You have subscribed to alerts for John Cosper.