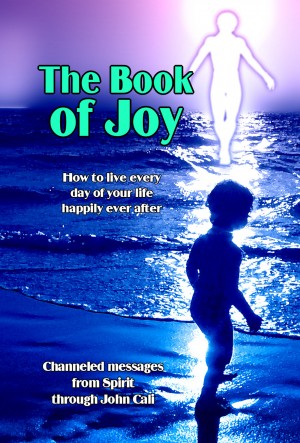 The Book of Joy: How to Live Every Day of Your Life Happily Ever After

By John Cali
Rated 5.00/5 based on 2 reviews
This book will serve to remind the reader of the goddess or god within. And from there, to inspire him or her to create the joyful, abundant life that is the birthright of us all. More
My spirit guides continually remind all of us this life we’ve chosen in these particular physical bodies at this particular time on the planet is supposed to be a joyful and joy-filled experience. And yet for many, if not most, it is not. Often, it’s anything but joyful.

This book will hopefully serve to remind the reader of the goddess or god within. And from there, to inspire him or her to create the joyful, abundant life that is the birthright of us all.

Here are the topics we cover in The Book of Joy:
Joy
Joy and Your Physical Body
Fun
This Single Solitary Moment
All Is As It Should Be
Who’s There?
Spirit Speaks
To Live In A Sacred Manner
Feeling Good and Getting Connected
You Live In A World of Absolute Abundance
Trusting Yourself
Listen
Gateways
The River of Life
Unshakeable Happiness
Success
The Power of Joy
Available ebook formats: epub mobi pdf lrf pdb txt html
First 15% Sample: mobi (Kindle) lrf pdb Online Reader
Price: $3.99 USD
Buy Add to Library Give as a Gift
How gifting works
Create Widget
Tags: happiness joyhappiness life purpose joy joy of life living your life with joy joy is your lifes purpose
About John Cali

John Cali is a freelance writer and publisher, focusing mostly on spirituality.

In the early 1980s John took a spiritual development course, and was introduced to his first spirit guide, Lydia. After Lydia arrived three other guides also came to him: Michael, Tamarra, and Joseph. Today these are John's four main guides. As a group he refers to them simply as "Spirit."

In 2008 John was one of the six channels featured in the documentary film, Tuning In.

A freelance writer since 1986, John has written for magazines, newspapers, newsletters, and other publications. He's written and published ten books, hundreds of articles, and several newsletters on various topics, including business and spirituality.

In 1996 John started publishing Sentinels of the Sky Newsletter, now known as John Cali and Spirit. John's mission in his work with Spirit is to help people live their lives with greater joy and abundance.

John loves dogs, and has had a continuous parade of canine characters frolicking through his life. In 2008 he published a book called Dogs: Heartwarming, Soul-Stirring Stories of our Canine Companions. This book is available at Smashwords. A print version of the book is available at Booklocker.com.

John has 2 books published at Smashwords:
Dogs: Heartwarming, Soul-Stirring Stories of our Canine Companions
The Book of Joy: How To Live Every Day of Your Life Happily Ever After 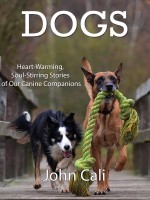 Reviews of The Book of Joy: How to Live Every Day of Your Life Happily Ever After by John Cali

(reviewed the day of purchase)
linda gronlund reviewed on June 22, 2011

This book helps to put things in perspective for me. There were many areas that gave me an ah-ha moment but something that caught my eye enough to have me copy and paste it for my later review was the information regarding guilt being associated with the past and fear is about the future. The important place to remain is in the now. I don't have a lot of guilt but the fear does creep in for me. To know that the future is what I fear the most can help me to focus on why I fear the future, and how to get beyond this. I loved the book. John writes beautifully and poses the life questions that made me continue turning the pages to find out the answers. Thank you for sharing this gift with me John.

You have subscribed to alerts for John Cali.

You have been added to John Cali's favorite list.

You can also sign-up to receive email notifications whenever John Cali releases a new book.