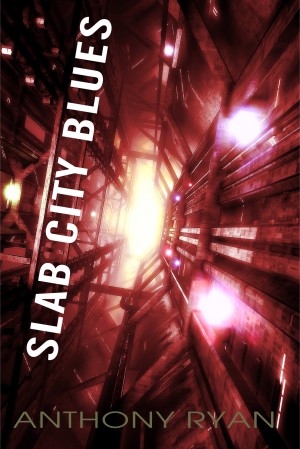 By Anthony Ryan
Rated 4.80/5 based on 5 reviews
Welcome to the Slab. A vast orbiting slum where rats grow big and sweat falls in rain. There's a stranger in town, a stranger with claws and a penchant for killing assassins. Finding him is the job of Inspector Alex McLeod, detective, disfigured war veteran and reluctant widower. Some days are worse than others on the Slab but today is going to be a gem.
Available ebook formats: epub mobi pdf rtf lrf pdb txt html
First 25% Sample: mobi (Kindle) lrf pdb Online Reader
Price: $0.99 USD
Buy Add to Library Give as a Gift
How gifting works
Create Widget
Tags: science fiction detective
About Anthony Ryan

This Anthony Ryan - he gave me the same thrill that I got reading Neuromancer and The Young Ladies Illustrated Primer all those years ago. If Ryan can do with a novella what Gibson and Stephson did with full novels, then this gentleman is one to watch. I am definitely now a fan. In only 7494 words Ryan in his terse, almost abrupt style can not only build an orbiting world, describe people, describe all the layers of a murderer case and solving said case, but he also makes the whole thing credible in the process, while making it dark - not just paranormal fiction type dark, I mean pyschically dark, as in dark as the darkest soul. It's really quite amazing.

Our protagonist, Alex McLeod the war veteran, detective is a dark and gritty guy, in fact they don't call them police they call them Demons. That should give you something to think about. Alex works Homicide - he gets the 5% of cases the department can't automatically solve with forensics. First thing, there's an Asian hit, The next thing you know, some huge guy with fur and claws has stolen a championship fighting rat the size of a big dog. And the most famous pride fighter of all time has missed his title match and nobody has seen him. Are all these things connected? What does it mean - a hit, a missing rat, a missing fighter? There's a clock ticking on a timer on a bomb, so Alex has to do something ASAP otherwise the fighter's heart will give out after 14 hours. Tick' Tick! Tick! Goes the clock as he dodges and weaves through the Slab.

This is no ordinary novella, Ryan has created extraordinary characters and placed them in the Slab, a kind of luxury in space gone wrong. There are three of these Slab novellas: this one, Slab City Blues:A Song for Madame Choi and Slab City Blues: A Hymn to Gods Long Dead. Pick them all up, and read them in the order specified, if you want to give yourself a treat. Ryan also has a full length novel, which is the next one I'm jumping into, it's called, Raven's Shadow - Book 1, Blood Song. So, off I go, back into the world of Anthony Ryan with my sights set high, because any guy who can do what he does with less than 8000 words, may be able to wonders with 100,000 or more.

I would recommend this novella to sci-fi lover's as well as people who love murderer mysteries and police procedurals. You get all three wrapped up nicely with a little bow. My bet is Ryan is going to be the next Neal Stephenson or, dare I say it, William Gibson. It won't take long until he gets the right exposure, then the lucrative contracts, then he'll be touring the country making predictions about life in the future. So before that happens, go to Smashwords and download all his stuff - two are free and the other two are cheap - Go! Go Now!

Enjoyable read, and right up my alley! Detectives, outer space, love it. Was very easy to fall into the story, loved the description (ex: exhalations from all the inhabitants create 'rain' in the Slab. Genius!) Looking for more from this author.

A very well written short story; I was drawn in primarily by the grittiness of the detective. The detective was also very human, and although a gritty detective is a fairly stereotypical character, I didn't feel that this particular one was that way; he felt very natural.

I actually felt very sad from the loss in the end of the story.

I'd love to see more from this author, or even just more about this character.