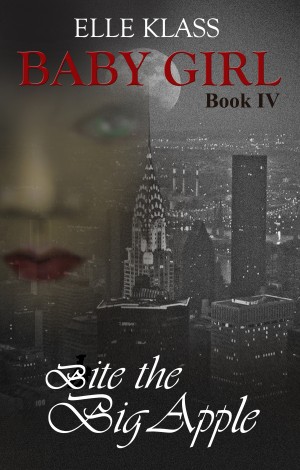 By Elle Klass
Rated 5.00/5 based on 1 reviews
Cleo, masquerading as Shanna, is hot on the trail of learning her identity. After spending a lifetime living lies she now finds her biological family, and learns the truth about her birth. Why she was kidnapped at the hands of Perdy and why Slug hunted her down; killing her one true love. More
Living in New York, working for the people who wanted to kill me, I was in the pit of the lion’s den and preferred not to be their next meal, so I started carrying a knife. Clutching my purse housing my blade closely and replaying the self defense skills Sam had taught me in Paris through my mind, I felt relatively safe. They hadn’t failed me yet, although a six foot man would be much harder to take down than a five foot woman. I wasn’t going without a fight. I kept my purse close. Doing my best to hide my nervousness I asked, “Do you have an appointment sir?”
He placed his paper on the chair beside him and stood up. I braced myself. Then he spoke. “Yes, I’m Mitchel Strat I spoke with William this morning and he asked me to meet him here at one o’clock.” The left side of his lips turned up in a quirky sly smile giving away his recognition of me.

First 20% Sample: epub mobi (Kindle) Online Reader
Price: $2.99
$1.20 USD
Buy with coupon Use the code AGB60 at checkout for 60% off during our site-wide promotion!
(Offer good through April 20, 2020 )
Have a better coupon?
Add to cart, then apply your coupon
Add to Library Give as a Gift
How gifting works
Create Widget
Tags: mystery action young love new york new adult
About Elle Klass

Elle Klass is the author of mystery, suspense, and contemporary fiction. Her works include As Snow Falls, Eye of the Storm Eilida’s Tragedy, and the Baby Girl series. Her work Eye of the Storm Eilida’s Tragedy is a Reader’s Favorite Fiction-Paranormal Finalist in the 2015 Reader’s Favorite Awards. She is a night-owl where her imagination feeds off shadows, and creaks in the attic. Visit her website at https://elleklass.weebly.com.

Fans of the "Baby Girl" series can now enjoy the long-awaited conclusion of this suspenseful saga about Cleo, a girl virtually orphaned at the age of twelve who not only has to survive on her own but elude someone who is trying to kill her. Cleo's travels have taken her near and far, partly to escape from whoever is pursuing her with evil intent, but also in search of her true identity since the woman she knew as her mother clearly wasn't her biological parent. This missing piece leaves a gaping hole within herself which she's desperate to fill with the truth.

As Cleo follows additional leads toward the answers she has sought for years, she finds herself in New York where she finally succeeds in finding her biological roots. I don't want this review to be a spoiler so won't go into it any more than to say it's a surprising yet very satisfying ending which answers all the questions presented in previous episodes. I do suggest, however, that readers might want to refresh their memories of how Baby Girl 3: "City by the Bay" ended because this one picks up at that point without fanfare. In fact, if you haven't followed Cleo throughout her quest you should read all previous episodes first to fully appreciate this great conclusion.

There is plenty of food for thought in this volume as Cleo synthesizes some important lessons. One is that a person's biological family is often not the desired source of nurturing and love you might expect. Orphans and adopted children tend to fill this painful gap in their background with an idealized version of who their parents are, which is seldom accurate. At some point it becomes apparent that parental surrogates and role models who have been there when you needed them as well as friends who have accepted, helped and loved you for who you are, even when you didn't know yourself, are your true family as opposed to blood relatives. Often when people think they're bereft of anyone who loves them it's simply because they have not yet learned to know and love themselves.

Throughout this series Cleo has assumed various personas such as Justine when she was in Paris and Shanna in San Francisco as she attempted to hide from her unknown enemies. These were never entirely comfortable for her because she knew they didn't represent who she really was. When she eventually discovers the identity of her biological family and finally answers the question which has haunted her most of her life, she realizes that it doesn't change as much as she expected. She's still the same person she's always been and is actually better for her experiences than she probably would have been if she'd been raised by her biological family. This knowledge frees her at last just to be Cleo, who she's been all along.

You have subscribed to alerts for Elle Klass.

You have been added to Elle Klass's favorite list.

You can also sign-up to receive email notifications whenever Elle Klass releases a new book.