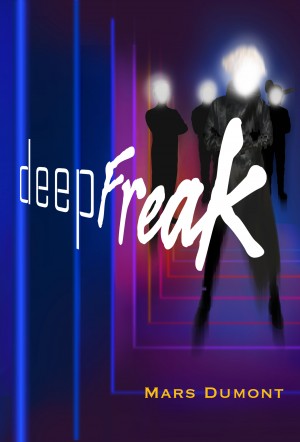 Living in simulated reality, SIM, is all the rage in the mid twenty-first century. But just when it seems that illusion has triumphed and Reality has become irrelevant, Reality throws a curve ball.

Audrey is a SIMdesigner and an artPrank hacktivist. When her friend Dano disappears, Audrey is forced into the gritty world of Real to find him. People disappear all the time in this dystopian near future. But then there are Type III disappearances, so when the young Milan also vanishes, but this time right before Audrey’s eyes, the quest for the disappeared takes a whole new turn and Audrey finds herself unwillingly thrust on a bizarre existential odyssey. Real? SIM? Or hallucination? Nothing is what it seems.
Meanwhile, Milan wakes floating in midair before the floor suddenly comes up and crashes hard into him. He looks around and at first the room does nothing. Then it wakes up. Myllan is on the other side, a place where people meet in Astral, not SIM, where luminescent mushrooms grow in the snow, and the weather knows what you are thinking.

Mars Dumont was born in Poona, India. His father was an endocrinologist, and research grants took his family to Mexico City, Silicone Valley, Stockholm, Ann Arbor, and finally New York City. After graduating from the Bronx High School of Science, Mars traveled around Europe, spent some time in London and Prague, and finally landed in Florence, where he studied art and art history. He finished his undergraduate studies at Columbia College, with a major in art history and a minor in physics, and then got a Masters degree at Columbia’s Graduate School of Architecture. Mars then spent many years doing architecture as a day job and playing electric guitar (for The Shameless Sycophants, Dark Blue and Linoleum Blownapart) at night, in clubs ranging from CBGB’s to the Knitting factory. Mars holds a black belt in Tae Kwon Do and an Elder Brother rank in Tiger Claw Kung Fu. He dabbles in the mysteries of Astrology and Tarot and draws on the archetypes to develop the characters in his books. Mars Dumont speaks five languages: Czech, French, Spanish, English and Italian. Remaining creative is, as far as Mars is concerned, the most important thing in life.

You have subscribed to alerts for Mars Dumont.

You have been added to Mars Dumont's favorite list.

You can also sign-up to receive email notifications whenever Mars Dumont releases a new book.