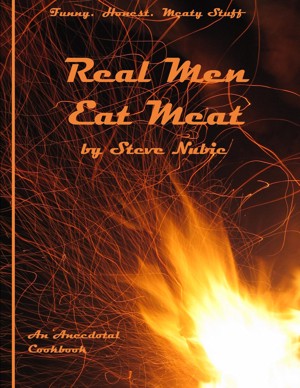 By Steve Nubie
Rated 5.00/5 based on 1 review
Real Men Eat Meat is an anecdotal cookbook. Meat dominates the theme the same way it should dominate the plate. The stories tend to be humorous although the slapstick of the behavior has more to do with the humor than jokes. There are also chapters on unique male cravings from hot peppers to clam chowder, and the sacred and secret ceremonies that mark these rituals and rights of passage. More
Real Men Eat Meat is an anecdotal cookbook. It's based on 35 years of travel across North America, Europe and Asia while I served as a conceptor and writer of new product concepts and menu concepts for an assortment of food companies. Suffice it to say I ate quite a bit, but most importantly needed to analyze and understand the key components that defined the meals and the menus. I accomplished this task in the company of a large and curious group of men from Master Chefs to food scientists. Regardless of their pedigree we all shared a passion for big meat cooked over big fires. This has led me to cook with great frequency amidst the company of men, women and children in ways that range from the primitive to the refined. The result is a collection of stories, recollections and insights on how to not only prepare meaty, meals but also how to truly enjoy them.
The anecdotes are true and the recipes have been tried, tested and tasted over and over again. It includes some curious cooking methods and classic guy cravings including chili, steaks, stews, pulled pork, clam chowder, fried turkeys, fish boils and other afflictions that men understand or indulge at least on a primitive level. It does pay homage to salads that are good partners to meat courses and some indulgent breakfast concepts and a few desserts. It also presents stories and recipes with a unique connection to my childhood and teen years. In that regard it's a bit of a blue-collar culinary journey with some side trips to epicurean experiments.
The primary target for the book is men. Men from 16 to 96 who respond instinctively to the aroma of meat searing over coals, the sizzle and sound of bacon
frying in the pan, and the silence that often accompanies a large group of guys eating
meat with myopic abandon.
Available ebook formats: epub mobi pdf rtf lrf pdb txt html
Price: $2.99 USD
Buy Add to Library Give as a Gift
How gifting works
Create Widget
Tags: humor cookbook robin hood steve nubie outdoor cooking recipes barbecue chili competitions real men eat meat turkey frying cooking for a crowd
About Steve Nubie

Steve Nubie has been writing professionally for 38 years.

He has 9 books ePublished including a time travel novel titled No Time Like the Present.
A business book titled Navigating the Creative Process: 6 Steps to Creative success.
An anecdotal cookbook titled Real Men Eat Meat.
Dark Paths. A collection of short stories about the macabre, the supernatural and bad science.
Justice. A short story about the disturbing truth behind innocent men and women in prison.
What’s the Buzz? A story that explores the classic 1950’s monster movie concept with a contemporary twist.
The Expert. An expert in demonic possession meets the exorcism dream-team.
The Dare. A ghost story that continues to haunt a small town.
The Moon Unit. Werewolves as good guys.

These books are listed on amazon.com and smashwords.com. Search word: "Steve Nubie"

He is also a member of the Yahoo Contributor Network and has posted numerous articles across a range of subjects. On two occasions he has been awarded the Yahoo Hot 500 award. He also teaches writing classes as an Adjunct Professor at the College of DuPage in Glen Ellyn, Illinois.

In addition he has written and produced numerous Twilight Zone episodes for CBS Entertainment including:

The Walkabouts which explores the surprising truth behind alien abductions. -2008.
Another Place in Time which examines the concept of parallel universes. -2008
Rest Stop. A surprising new twist on a massive alien invasion of the planet earth. -2009.
The Nanobots. The chilling implications of nanotechnology. -2009.
2012. What's really going to happen? -2010.
Bigfoot in the Door. The origins and secrets of Sasquatch. -2010.

He has also written audio dramas for the Fangoria Dreadtime stories series including:
-A Fungus Among Us. The very real possibility that the next global pandemic
may be a primitive and insidious form of mold. -2011.
-Here Come the Sludge. Armageddon meets the blob. -2012
Screenplay -The Moon Unit. Werewolves as good guys. -2011
Television Series: 18 episodes/Proposal. -Alberto y Lucia -2012
Television Series: 13 episodes/Proposal. -Real Men Eat Meat -2012

• In addition he has generated more than 200 press releases across a range of subjects.
• He has also written, produced and directed hundreds of television commercials, videos, wireless apps, radio commercials and print ads for numerous Fortune 500 companies.
• He has a strong background in advertising and marketing across all media and disciplines from direct mail to new media and strategic planning. stevenubieco.com
• He has traveled extensively on international assignments including two years in Asia based in Hong Kong and two years in Europe based in London, and has continually studied the unique characteristics of language, culture and belief systems around the world. 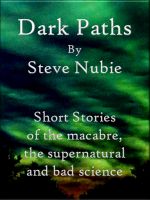 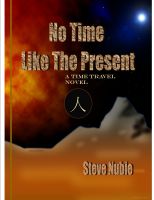 What a journey. I thought I was getting a cookbook with interesting recipes along with some stories. What I ended with was journey into the pleasure showing not only the passion of cooking, but also the passion of friends and good times. More than recipes, it is a look into a personal life, one that is not that different from yours or mine. I will be using recipes from this book and I am sure I will have my own stories, although not like the authors, unique nonetheless.

You have subscribed to alerts for Steve Nubie.

You have been added to Steve Nubie's favorite list.

You can also sign-up to receive email notifications whenever Steve Nubie releases a new book.