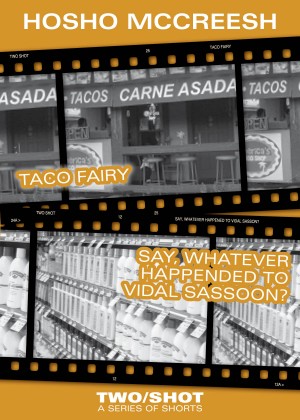 In “Taco Fairy” we wonder what will $2 get you at a nearby tacqueria? Answer: A world of stupid trouble.

“Say, What Ever Happened To Vidal Sassoon?" explores the sexual politics of business trips, and free hotel shampoo.

Hosho McCreesh is currently writing & painting in the gypsum & caliche badlands of the American Southwest. His work has appeared widely in print, audio, & online.

Absolutely loved these stories. Original, dark at times, funny, and told with heart. Would love to read a novel by this author.

I found this giveaway on Goodreads Making Connections. The fact that it was men's literary fiction intrigued me. I write upmarket fiction with strong male characters and have been looking for male readers, so it caught my eye.

I wasn't disappointed. McCreesh is a talented writer. His sense of what's important to the telling of a story is finely honed. In Taco Fairy, he takes a single paragraph to convey a man's life so vividly, that it makes you want to watch him eat a taco, pet a dog, and stand around in the street next to him. His language is a precise conglomeration of words that captures the essence of a man, a culture, and the environment, and his dialogue is spot-on! He sets it up and delivers.

Now for what I didn't like. His overuse and improper use of the dash and ellipsis was very distracting and unnecessary. In fact, much of the punctuation could use cleaning up. Also, he started more than one sentence with a number. The word for the number should be written out at the beginning of sentences.

Say, What Ever Happened to Vidal Sassoon? reminded me of an O'Henry tale, an enjoyable read with a twist at the end. But I think this one could use lots more editing. I found myself wanting to rearrange some sentences, change paragraph points, and tighten up the language to equal that of Taco Fairy. In one paragraph, he started 12 sentences in a row with the word "she". What's needed there is more variety in sentence structure, specifically beginning some sentences with a verb instead of a noun will help. The story itself has great potential but it's not ready for prime time.

(review of free book)
Christopher Cunningham reviewed on May 23, 2011

Written in clear, descriptive prose, Hosho McCreesh's stories draw you into the dream and let you walk around in another world for a while. Vivid action across a spectrum of existential humanism and working class endurance.

You have subscribed to Smashwords Alerts new release notifications for Hosho McCreesh.

You have been added to Hosho McCreesh's favorite list.

You can also sign-up to receive email notifications whenever Hosho McCreesh releases a new book.