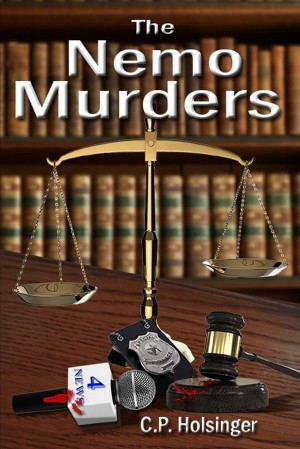 By C. P. Holsinger
Detectives Nick Greer and Sonny Madison are on the trail of a serial killer who calls himself Nemo. Is he real? Or is it a ploy to mislead the detectives? The list of victims grows as does the list of suspects while the detectives struggle to find the one common denominator to connect them all. Even the most honorable aren't exempt from the effects of vengeance, evil, infidelity, and jealousy. . . More
When the call comes in to the Phoenix Police Department that the body of well-known television news personality and part-time anchor Marti Montgomery has been found brutally murdered, Detective Lieutenant Nick Greer is called to the scene.

Nick is the lead detective of the elite Phoenix Special Investigation Unit, a small, specially chosen squad, whose duties are to tackle special, mostly high-profile cases.

Nick and his partner, the ever surprising and sometimes rogue Sonny Madison, find themselves challenged as the list of victims begins to grow and so does the list of suspects. Is it a stalker? A jealous wife? A resentful co-worker? A jilted lover? Or is it someone else?

This third installment of the Nick Greer murders is the most challenging of all as the bodies begin to pile up and nothing and no one connecting them can be found. The surprise ending will leave the reader in shock.

Chuck Holsinger grew up in a small, quiet town nestled along the banks of the Ohio River. He loved Rock & Roll, baseball, the Steelers, and Erle Stanley Gardner mysteries.

After returning from Vietnam, he and his wife, Judy, moved to Arizona, where they now own a successful business and are enjoying their four daughters and a plethora of grandchildren.

Chuck is a pilot and flies when he gets the chance. He still listens to Rock & Roll, (on the oldies station) and he still roots for the Steelers.

Though interests come and go, his passion for mysteries and action & adventure remains. It's that passion that inspires him to write.

Head on over to www.cpholsinger.com

You have subscribed to alerts for C. P. Holsinger.

You have been added to C. P. Holsinger's favorite list.

You can also sign-up to receive email notifications whenever C. P. Holsinger releases a new book.