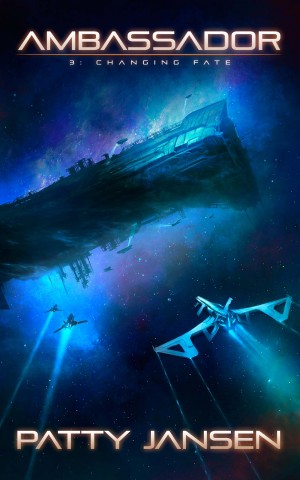 By Patty Jansen
Rated 4.00/5 based on 1 reviews
An ancient ship that was thought lost returns to inhabited space. Where have they been and what do they want? More
Fifty thousand years ago, a meteorite hit the planet Asto, giving its Aghyrian inhabitants mere days of notice. Three ships escaped the Armageddon. Two went to the neighbouring planet. The third, a massive generation ship, refused to take on refugees, and then vanished without a trace.

Its initial burst of communication caused the outage of the Exchange, the FTL network for transport and communication, but since then the ship has been silent. It jumps about at random, using wormholes it generates with a drive the likes of which no one has seen before.

Meanwhile at the gamra assembly, people jostle to be in the best positions when it inevitably turns up in inhabited space. What the ship wants or whether there is anyone on board no one knows, but diplomat Cory Wilson knows one thing: when it turns up, he must avoid a conflict at all cost.

If only gamra presented a united viewpoint. If only Asto’s army wasn’t keen to get involved. If only the Aghyrians at gamra didn’t do what they do best: manipulate and play games with everyone. While the ship approaches, the delegates bicker, and the time for negotiating is fast running out.

The adventures, or misadventures, of Cory Wilson continue in this, the next instalment of the Ambassador series.

Delegate Wilson discovers that the exchange outage that necessitated his trip to Asto in the previous book, was caused by the return of a ship that vanished 50,000 years ago. Political intrigue as the various factions within the entity gamra bicker and jostle for an advantageous position ensues. Cory and his team once more are left with the task of pulling it out of the fire.

Another good read. There's humour, action, mystery and a little bit of the thriller all rolled into one. The only thing missing is the clash of battle, but that isn't the essence of these stories. These are about a man, struggling to understand and survive in a melting pot of different cultures where everyone is essentially an offshoot of humanity. Cory Wilson's main weapon is his words and his mouth.

A wonderful description of the new, or should I say old, arrival. It took a moment to visualise it, but then ... hey why not? If you have that technology why be restricted to using it as we would?

Three days to read on the way to and from work and just before going to sleep. On to the next volume.