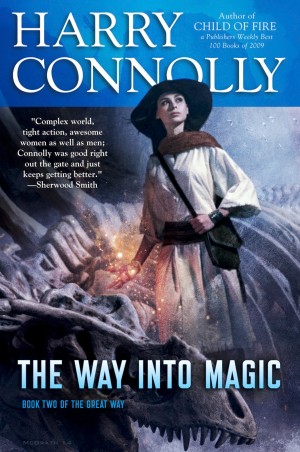 The Way Into Magic

By Harry Connolly
BOOK TWO OF THE GREAT WAY: Continues the story from The Way Into Chaos, as the Peradaini empire crumbles, Tejohn and Cazia realize they are not fighting to restore More
BOOK TWO OF THE GREAT WAY: Having lost the prince to the madness of The Blessing, Tejohn and Cazia are the only people who know of his plan to retrieve a secret spell that might, just might, turn the tide of battle against the grunts.

But Tejohn’s body is broken, and Cazia has been stripped of her magic. Worse, both are being held captive: Tejohn faces charges of treason in the lands where he was born. On the other side of the continent, Cazia is a prisoner of the Tilkilit queen, a creature with a desperate, deadly plan.

While they struggle for their freedom, The Blessing continues to spread across Kal-Maddum, their numbers growing more numerous as the human population shrinks. What had started as a race to restore an empire has quickly become a mission to save humanity from extinction.

“Complex world, tight action, awesome women as well as men; Connolly was good right out of the gate and just keeps getting better.” — Sherwood Smith