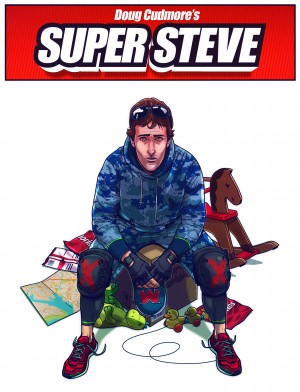 The darkly comic Super Steve asks: what if a regular person suddenly found himself stronger, faster, smarter than his fellow mortals? If nothing else (and, increasingly, there is nothing else), Steve is that average man, someone who clings to his sense of stand-up-guyness. He still puts in the overtime, even as the desks around him empty at the soon-to-be-extinct Metroburgh Green Pages. He makes sure his deeply pregnant wife and his baby-to-be live comfortably, even as his mountain of debt grows Himalayan. Sure, being the calm face that keeps everything alright gnaws at his slowly expanding gut some days, but it’s nothing a couple of MetroLagers can’t numb.

And at first, saving school busses and pulling kittens from trees suits Steve perfectly. But as crime grips the city – an agitated former Occupier freeing the people’s money; a disgruntled ex-geologist with a knife to grind; a military man determined to keep the streets safe, no matter how unsafe they get in the process – the demands grow unbearable. As Steve’s wife grows suspicious of his late-night activities, as his boss threatens his job if the absenteeism doesn’t end, as his finances spin out of control after a gadget-buying spree, he is forced to ask himself: Must he sacrifice Steve Janson to be a hero? Or does he have to sacrifice the city in order to live with himself?
Available ebook formats: epub
You set the price! USD
Buy Add to Library Give as a Gift
How gifting works
Create Widget
Tags: superhero fiction fiction fantasy urban life

Ever wondered what a superhero might do all day, if his day job wasn't being a millionaire playboy like Bruce Wayne?

Ever considered the implications behind all those wacky origin stories, where it seems like everyone gains their superpowers by being dunked in a vat of radioactive goo or bitten by a radioactive bug?

What would the world of superheroics look like if some regular guy - perhaps a guy like Steve Janson - took up the cape and underwear-as-outerwear?

Steve's closest superhero counterpart is most likely Spiderman, if only because of the Peter Parker good-guy angle, working at his local division of the Yellow Pages - the Metroburgh Green Pages.

Then again, Peter Parker never had a pregnant wife to support, nor did he have to tangle with the fact that in our digital age, phone books are increasingly unwelcome relics of the past.

Steve is a middle-class guy before his transformation to superhero - and that's yet another section of the American populace that's increasingly considered an unwelcome relic of the past. He's a guy who's just trying to scrape by, and when he makes the transformation from ordinary to extraordinary we might logically (at least by comic book standards) expect things to go from rough to smooth sailing for him.

Steve's story is the story of a grinder - someone doing his best to bust through to the next tax bracket to provide for his family and do the right thing. Steve may be a suburban white dude, but does that really give him any privileges? Yes and no. Even though the robbery scene that robs him of his ordinary life is scripted straight out of Pulp Fiction (and rightly so - comic books being, well, pulp fiction), Steve isn't exactly living the high life. Sure, he's got a decent existence carved out for him for now, but he's also got a mountain of debt threatening to tip over into an avalanche. And what then?

Like anyone living from paycheck to paycheck, Steve isn't exactly flush with cash in case of emergencies. And when a real emergency strikes, cash can't exactly save him.

Like any good hero, Steve's got plenty to wrestle with emotionally as well as morally. And that's what makes Super Steve interesting. But what makes it worth reading is the humor and the humanity that propels the story forward.

You can read a 30-page comic book, just as easily as you sling back a crappy chain "hamburger," but reading a superhero novel is another matter entirely. There's certainly an ass-kicking or two to keep things interesting, but what really hooks the reader of Super Steve is the way that the form lends itself to both filmic and novelistic qualities, painting pictures of heroic (and villainous) deeds, as well as diving deep into the mind of this reluctant superhero.

Spend a little time with Steve and see just how super you think he really is.

You have subscribed to Smashwords Alerts new release notifications for Doug Cudmore.

You have been added to Doug Cudmore's favorite list.

You can also sign-up to receive email notifications whenever Doug Cudmore releases a new book.