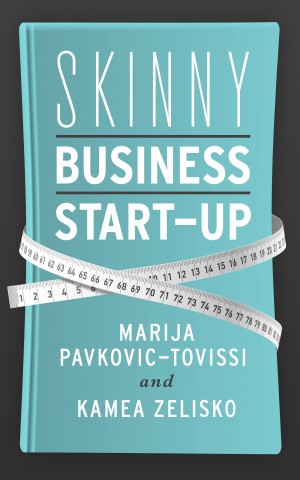 Marija Pavkovic-Tovissi and Kamea Zelisko have founded over fifteen successful companies applying a "skinny business" methodology that they have created and coined over the years. Creating something from scratch with next to no capital and turning it into a roaring success is something the two serial entrepreneurs specialize in. This book, is all about discussing some simple ways to help you overcome the fears and common concerns that can be paralyzing in the incubation stages of launching a new venture.

Inspired by her immigrant parents’ plight for education, at the age of twenty-one, Marija Pavkovic founded MaKami College, one of the largest Alberta-based private vocational colleges. A serial entrepreneur, Marija now sits on the board of directors for multiple companies and has been widely recognized for her business success. In 2014, MaKami was named #62 of Profit 500’s list of Canada’s Top 500 Fastest Growing Companies with Marija as its CEO, and Marija personally was named #66 of Canada’s Top 100 Female Entrepreneurs by Chatelaine Magazine and Profit W100. She has been nominated for both the Alberta Women Entrepreneur’s Celebration of Achievement Award and the Ernst & Young’s Entrepreneur of the Year Award, and she won the Fierce Community Champion Award in 2014. In 2009, she co-founded an educational charity, QE Education Foundation. She is the co-author of multiple books focused on helping women succeed in business, and she mentors women in business, does speaking engagements internationally, but still remains an avid volunteer and philanthropist.

You have subscribed to alerts for Marija Pavkovic-Tovissi.

You have been added to Marija Pavkovic-Tovissi's favorite list.

You can also sign-up to receive email notifications whenever Marija Pavkovic-Tovissi releases a new book.