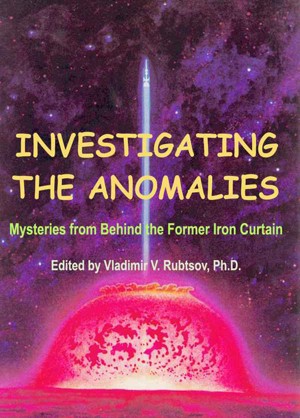 Investigating the Anomalies: Mysteries from Behind the Former Iron Curtain

By Vladimir Rubtsov
A unique collection of articles about real enigmas that are still hidden behind the former Iron Curtain, now a Curtain of Silence. Edited by Vladimir Rubtsov, Ph.D., author of "The Tunguska Mystery" (Springer New York). More
Ten papers dealing with three subjects: the UFO problem, the enigma of the Great Tunguska explosion, and the problem of paleovisits – ancient ET visits to the Earth. It seems as if mainstream science deliberately pushes them out, carefully forming a gap between itself and “uncomfortable” questions to which scientists have no definite answers. In this way another sphere of human thought is however enriched, namely anomalistics...

A Thousand Years of Russian UFOs, by Mikhail Gershtein

History of State-Directed UFO Research in the USSR, by Yuly Platov and Boris Sokolov

The Petrozavodsk Phenomenon, by Lev Gindilis and Yury Kolpakov

The Russian Roswell: a Legend Under Examination, by Yury Morozov

On the Development of the Idea of Paleocontacts in the USSR at the Beginning of the 1960s, by Matest Agrest

The Mystery of the Black Ball, by Valentin Fomenko

The Cosmic Sword, by Nikolay Vasilyev

The Geomagnetic Effect of the Tunguska Explosion and the Technogeneous Hypothesis of the TSB Origin, by Victor Zhuravlev

About the Contributors
About the Editor
List of Suggested Keywords

Vladimir Rubtsov was born at 1948 in Kharkov, then the USSR. He received his M.S. degree in computer science in 1972 and after that joined the laboratory of Dr. Alexey Zolotov in Tver, where for three years studied the problem of the Great Tunguska explosion of 1908. Received his Ph.D. degree in the philosophy of science from the Institute of Philosophy of the Academy of Sciences of the USSR, having defended in 1980 the doctoral thesis “Philosophical and Methodological Aspects of the Problem of Extraterrestrial Civilizations” (the first of its kind in the former USSR).

Dr. Rubtsov has authored some 150 scientific and popular-science articles in the Soviet, post-Soviet, and foreign press, as well as three books: “The Problem of Extraterrestrial Civilizations” (with Arkady Ursul, Kishinev: Shtiintsa, 1984 & 1987); “UFOs and Modern Science” (with Yuly Platov, Moscow: Nauka, 1991); “The Tunguska Mystery” (Springer New York 2009; ISBN: 9780387765730). He is a full member of the Russian Academy of Cosmonautics, an associate member of the Society for Scientific Exploration, USA, and a member of the SETI Center of the Russian Academy of Sciences.

Vladimir can be contacted through his webpage on Facebook: http://Facebook.com/RubtsovTunguska

You have subscribed to alerts for Vladimir Rubtsov.

You have been added to Vladimir Rubtsov's favorite list.

You can also sign-up to receive email notifications whenever Vladimir Rubtsov releases a new book.