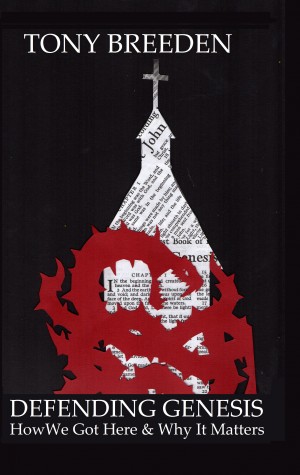 Defending Genesis: How We Got Here & Why It Matters

Christian apologist and science fiction author Tony Breeden explores the ramifications of the Origins Argument and demonstrates that, ultimately, the debate is not about facts or even about science. It's about authority: The revealed Word of God versus the word of all-natural science. The question is: which authority best explains the world we live in?
Available ebook formats: epub mobi pdf rtf lrf pdb txt html
First 10% Sample: epub mobi (Kindle) lrf more Online Reader
pdb
Price: $5.99 USD
Buy Add to Library Give as a Gift
How gifting works
Create Widget
Tags: evolution creationism creation science genesis apologetics darwin bible interpretation
About Tony Breeden

Tony Breeden is a storyteller, public speaker, vocalist and artist from West Virginia, home of Mother's Day, the Mothman and the Flatwoods Monster.

He got the writing bug as a child when his late aunt Sharon helped him make his very first book about dinosaurs, vigorously illustrated in crayon. His spirit animal is Ray Harryhausen. He is weirdly related to the Mothman.

Luckbane, the first novel in the Otherworld series, was published on Friday 13th of September '13. He also received his Bachelor's in Communications on a Friday the 13th, so there's that...

You can find out more about his books and what he's currently writing at http://TonyBreedenBooks.com and on Facebook at http://facebook.com/tonybreedenbooks

Read excerpts of his books at http://wattpad.com/TonyBreeden

You have subscribed to alerts for Tony Breeden.

You have been added to Tony Breeden's favorite list.

You can also sign-up to receive email notifications whenever Tony Breeden releases a new book.