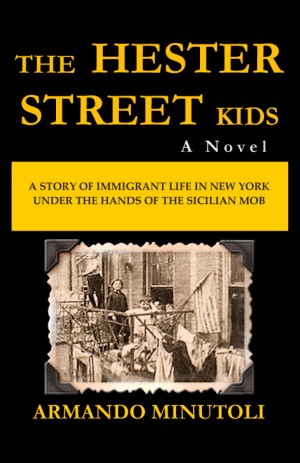 "The feisty daughter of a Little Italy pharmacist learns of her father's secret prominence in the New York Mob. Her discovery unravels lies and treachery that stir her very existence and risk her search for love.” More
Set in New York’s Little Italy in the 1950’s, this character-driven drama is mysterious and sensual. It weaves lies with love, treachery with truth, and explores the ultimate meaning of moral fortitude, honesty, passion, and loyalty.
The story incorporates contemporary pleasures: a love story, spice, family secrets, and crime investigation. But its underlying message is one of moral choices. It also gives a historic glimpse of the 50s. Readers will find themselves on a nostalgic journey back to the postwar time of economic growth.
This work does not glorify the mob like so many others have done. It is a saga that talks to the plight of Italian American immigrants striving for a living in the new world under the thumbs of the mafia.
Katherine Burdino, The feisty daughter of a Little Italy pharmacist learns of ominous family secrets… As a first generation college-educated woman of Italian descent,
Katherine was considered a rarity by those of her time. Society at large and her own Italian-American community held her up with great esteem, but Katherine’s idyllic and fruitful life was on the brink of cascading beneath her…
Shattered by her discovery of the lies and treachery that stir her very existence, she finds herself under threat from the New York Mob, not only risking her life but her chance for truelove...
She learns of criminal alliances with close family friends, some of whom are cold-blooded killers. Her questions lead her into the dark side of life with the unfolding of secrets, in a story that cuts to the core of the struggle of good versus evil.
With her new knowledge, Katherine’s mission is to protect those she loves, account to society, and more importantly reveal to the love of her life, Kevin, this deep and most shameful secret, fully knowing that she could lose him and her chance for real happiness...

His first writing project was a non-fiction book about the Apparitions of the Blessed Virgin Mary in the small village of Medjugorje in then Yugoslavia, now Bosnia-Herzegovina. Titled: “Medjugorje, A Pilgrim’s Journey.” Originally published in 1991; with the forward and collaboration by Author, John Westermann (Exit Wounds). Because of popular demand it was re-released (Second Edition) in 2010. Also, the book is in the process of its Spanish language translation due for completion mid-2015.
He is presently in the completion stage of novel “SCHISM” A fantasy about an unheard of problem in Heaven. He has also written the screenplay adaptions for both “SCHISM” and “THE HESTER STREET KIDS.” In the past he has written articles for the National Catholic Register and articles about Marian apparitions for local Long Island, NY publications.
He was awarded a Bachelor of Science Social Welfare with a minor in psychology and a Master’s of Science in Clinical Social Work from Fordham University School of Social Service with emphasis on psycho-dynamic psychotherapy.

You have subscribed to alerts for Armando.

You can also sign-up to receive email notifications whenever Armando releases a new book.