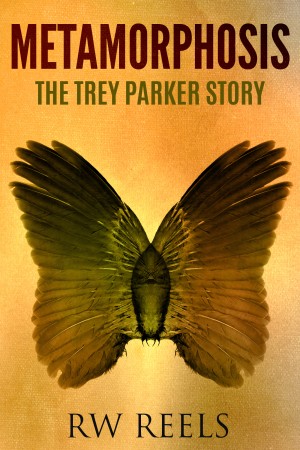 By R.W. Reels
Metamorphosis: The Trey Parker Story, the first novel in a three-part paranormal thriller series. A young male is forever changed after a near death experience. His incident invites the attention of a covert Government agency. A gritty detective remains diligent in discovering the facts of the incident and encounters opposition from the unlikeliest of places. More
Metamorphosis: The Trey Parker Story, the first novel in a three-part paranormal thriller series, will compel readers to question whether the life track they have been traveling is absolute and unchangeable, or whether the potential for greater influence lies within them, waiting to flourish. The novel begins with a young black man, Trey Parker, doubting the validity of what his parents and the church have always taught him about the power of faith. Within ten years, Trey’s father has abandoned the family, and Trey falls into dangerous behavior that results in his being shot. This near-death experience alters the course of his life. He develops new abilities that he can use to heal others and to convince them of their worth, and though Trey feels propelled down this path, he embraces his new purpose wholeheartedly. His reconfigured destiny leads him to reconnect with his family, forge new, fulfilling friendships, and even to fall in love. However, surreptitious forces attempt to thwart Trey’s happiness and his goals. A police detective vows to uncover the details of the shooting and a former Special Forces Colonel is assigned by the government to collect information about Trey, an object of suspicion now that his brush with death has transformed him. Both Detective Landis and Agent Frank Smith pursue professional and personal motives in discovering “the truth” behind Trey’s incident, and wrestle with antagonistic events and people—as well as their own backgrounds, belief systems, and flaws—throughout their investigations. Ultimately, Trey Parker’s new altruistic role in the community causes trouble for him and for those he cares about. He must determine how to manage his metaphysical gifts, and when to listen to his own instinct in the process of fighting a corrupt system that threatens the most sacred rights of humanity.
Available ebook formats: epub mobi pdf rtf lrf pdb txt html
First 8% Sample: epub mobi (Kindle) lrf more Online Reader
pdb
Price: $3.99 USD
Buy Add to Library Give as a Gift
How gifting works
Create Widget
Tags: government betrayal spiritual awakening government conspiracies paranormal abilities death and rebirth spiritualsciencefiction detective action death and afterlife spiritual enightenment
About R.W. Reels

RW Reels
My infatuation with writing was born before I ever took my first breath, somewhere on the rural plains of Eastern North Carolina, nourished by the adventures of my grandmother’s childhood. From the time I was only four or five years old, her memories gave flight to my imagination and fuel to my curiosities. Her stories widened my eyes to the fascinatingly bizarre in the everyday.
As a young girl, my grandmother would bring her puppy with her to stalk rabbits every morning. The two of them would chase an unlucky long-eared rascal until it escaped into a hollow at the base of a tree, and she would run a stick around the inside of the opening as though churning butter. The spell of the sound and vibration would lure the rabbit out of the tree and into her hands.
Good fiction, inventive and provocative fiction, reverberates in readers and spellbinds them. It can spur surprise, delight, discomfort, and revelation and defy reason. As a storyteller, I strive to help others solve their problems by sharing things that I have read about, heard about, and seen. But I also prize the look on people’s faces when they hear the brilliant punch line of a joke, or when they experience an epiphany that knocks the logical wind out of them. These are the reactions that I live to inspire in my audiences when I write paranormal thrillers.
My obsession with the extraordinary in my writing might also, ironically, stem from my 20-year career in the U.S. Army. I can allow my mind to wander in the extraterrestrial sphere while my love for my country keeps me grounded in domestic affairs. Of all of my accomplishments, serving as a paratrooper in a Special Forces Group and a Field Artillery outfit during Operation Desert Shield/Desert Storm claims high rank. Few situations force a person to confront his humanity as painfully as going off to war, and this experience taught me both to accept accountability for my actions and to trust others. Eventually, I became a successful Army Recruiter and Station Commander, earning the Top Recruiting Station awards in Dallas and Seattle Recruiting Battalions. North Carolina Central University granted me a Public Service Award for my work in the local community. And currently, I serve fellow veterans as an HR Specialist for the Department of Veteran Affairs.
Other passions of mine include playing chess, traveling, and indulging in my contrarian nature by instigating debate. Spending time with my wife tops the list of my life’s privileges, however. Whether I am entertaining her with my emulation of Laurence Olivier as Marcus Crassus or protecting her from an elk during one of our photography excursions in the wild, I treasure her companionship and affection.
When I was twelve years old, I announced to my Aunt Becky and Cousin Tony that I wanted to write a book. They stared at me in astonishment. The world of publishing was an enigma to simple country folks in Beaufort, North Carolina in 1982. These days I am achieving my dream with the ebook, a medium through which I can express my individuality without sacrificing my voice to expectations of marketability, popularity, and deadlines. My goal is to create an opportunity for escapism that is bold and absolute.

About the Series: Metamorphosis: The Trey Parker Story

Metamorphosis: The Trey Parker Story, the first novel in a three-part paranormal thriller series, will compel readers to question whether the life track they have been traveling is absolute and unchangeable, or whether the potential for greater influence lies within them, waiting to flourish.

Reviews of Metamorphosis: The Trey Parker Story by R.W. Reels

You have subscribed to Smashwords Alerts new release notifications for R.W. Reels.

You have been added to R.W. Reels's favorite list.

You can also sign-up to receive email notifications whenever R.W. Reels releases a new book.