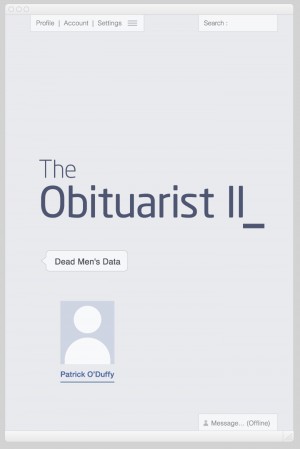 By Patrick O'Duffy
Rated 4.00/5 based on 1 review
Obituarist Kendall Barber is still trying to make amends for his past by cleaning up the online presence of the dead. But nothing is ever simple, and before long he's being beaten by neo-Nazis, smacked around by cops and caught up in a murder investigation. Kendall has a quick mind, a smart mouth, and a large Fijian friend. But will those be enough to help pay his rent - and keep him alive? More
Who's settling accounts for the dead?

Two years after his last adventure, obituarist Kendall Barber is still trying to make amends for his past by cleaning up the online presence of Port Virtue's dead. Business isn't great, so he jumps at the chance to work for the estate of a racist demagogue, while at the same time accepting an under-the-table job to find out who hacked the social media accounts of a police captain.

Who's playing games with the living?

But nothing is ever simple, not in a town full of petty criminals and poor decision-making. Before long Kendall is being beaten by neo-Nazis, smacked around by cops, berated by a beautiful journalist and caught up in a murder investigation. Actually, make that multiple murders. There's also a fight between a badger and a baboon.

Who's in over his head? Again?

Kendall has a quick mind, a smart mouth, a good computer and a large Fijian friend. But will those be enough to help him wrap up the case and pay his rent? Or more importantly, keep him alive?

Patrick O'Duffy is tall, Australian and a professional editor, although not always in that order. He has written role-playing games, short fiction, a little journalism and freelance non-fiction, and is currently working on a novel, although frankly not working hard enough. He loves off-kilter fiction, Batman comics and his wife, and finds this whole writing-about-yourself-in-the-third-person thing difficult to take seriously. 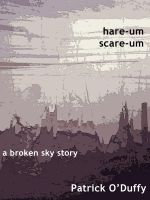 Patrick O’Duffy’s followup to his wildly entertaining 2012 crime novella The Obituarist opens with the attention-grabbing line “ECCENTRIC MILLIONAIRE COMMITS SUICIDE-BY-BEAR”, then immediately subverts that declaration of delirious intent with a snarky deconstruction of its own cynicism and deceptiveness.

The book holds the same mirror up to its protagonist. Kendall Barber returns as Port Virtue’s resident social media undertaker, a systems analyst specialising in discretely closing down the online presence of the recently deceased on behalf of grieving relatives who may not want to know what their loved ones got up to online.

As before, Barber is a study in contradictions – a cynical, shifty smartarse with the cracking skills of a Russian spammer playing the part of a sensitive online undertaker. He's a beaten-down has-been with a shaky assumed identity and a driving sense of justice undermined by a fluid ethical framework. Considering the rough treatment he collected in the previous story – beaten up, run over with a car, etc – he also has a surprisingly undeveloped sense of self-preservation when it comes to keeping his mouth shut.

Basically, he’s a perfect modern noir anti-hero. This time around he’s caught between an investigation of his racist demagogue client’s affairs, fending off a hot but nosy investigative journalist, getting the snot beaten out of him by the usual collection of brutal low-rent criminals and playing a game of cat and mouse with Port Virtue’s corrupt, violent police department. Oh, and being mauled by unexpected wildlife.

The setting of Port Virtue gets a little more flesh on its bones with this installment – Barber’s client is the local eccentric scrap merchant king, with a notorious private zoo and an off-the-book business as a right-wing crank-for-profit. The discovery of a collection of body parts looms over the story like a winter cloud. And Kendall Barber clearly has a love-hate relationship with the town where nobody knows he’s a native.

Dead Men’s Data is coarse, violent and awash with the weary bitterness of optimism dashed one too many times. And that’s a terrible description, because this book is also hilarious and brimming with righteous (and yeah, sometime self-righteous) anger. Kendall Barber is more devil than saint, and he knows it, but he’s determined to do as much good as possible before Port Virtue grinds him up for good. He just doesn’t plan to walk a righteous path to do it, not when tricks and lies will do the job just as well. (Spoiler: they don’t).

It’s short, it’s wild and contains even more creative swearing, grotesque thuggery and cautions against lazy password administration than the previous book. If nothing else, after reading this you will almost certainly want to tighten up your online security habits.

You have subscribed to Smashwords Alerts new release notifications for Patrick O&#039;Duffy.

You have been added to Patrick O&#039;Duffy's favorite list.

You can also sign-up to receive email notifications whenever Patrick O&#039;Duffy releases a new book.