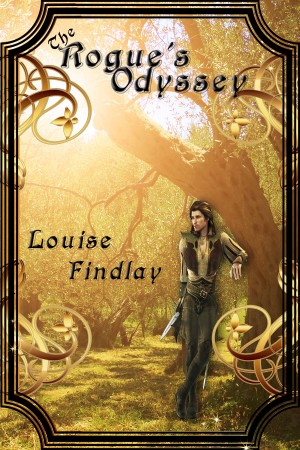 By Louise Findlay
Rated 3.00/5 based on 1 reviews
Heroes with an edge are always fascinating and when the metier is poetic, the romance tends to rise exponentially because, after all, everyone loves a rascal who’s only a heartbeat away from being on the wrong side of the tracks, but who somehow always battles on to win the day, whether that’s fleeing from dastardly henchmen, or fighting a terrifying dragon.

Louise Findlay is a web designer, fantasy author and branding expert in whose specialty is getting to the heart of what her clients want. She's collaborated with developers on group projects and worked solo creating websites and mobile web apps as well as written short stories and poetry that have been included into anthologies.

I am posting this on behalf of Review Board member Mr. Controversy. This title was provided by the author in exchange for an honest review.

“The Rogue’s Odyssey” is a very short, 800-word poem written by Louise Findlay.

While reading the introduction to our poem, there is an air of awkwardness as the feelings of run-on sentences happened again. Also, the second sentence concluding the Introduction has a question within its wording, which triggered my MS Word program to ask me if I desire to add a question mark after the word “high”.

One other item that I need to point out is the word “Poem” at the top of the poem just before it starts.

In its place, I would suggest replacing “Poem” with “The Rogue’s Odyssey”. It will look cleaner to your readers.

In regards to the poem itself, it is about a young rogue who is in possession of an orb received by magical means with a questionable origin. It is a vessel of Light and Hope for a Kingdom which is in great need of its light. With assistance from a mage, a wizard, and a warlock, the rogue must overcome obstacles in the form of corrupted knights which was instigated by the dark heart of Lord Caelin, and a fire-breathing dragon in order to reach the shrine of Luminos Dasos, located in the temple of Luna Moon. Within this temple, the shrine will house the magical orb and restore light to the kingdom.

The poem, overall, was pretty good.

The commas in the poem were a bit strange and alien to me at first. After speaking with Miss No Labels (as well as reading to poem to her), she and I agreed that the commas were used effectively, giving us the cue to breathe within the dialogue. Certain parts of the poem flowed B-E-A-U-T-I-F-U-L-L-Y where the commas were utilized to perfection.

Visually, the structure is on point in some places. For my writing style (when I use commas for poetry), I go to the next line. Ms. Findlay did not in some parts. At the same time, the poem still read nicely and gave me a sense of enjoyment and pleasure by the time I read the last line.

Seeing this price reminds me of a poem I read last year. It had 6 or 8 lines, and was selling for the same price point. Although that poem was cute, I felt disrespected that it was priced at that price point where other poetry books were priced the same and offered more poetry for that selling price.

Despite “A Rogue’s Odyssey” is substantially longer than the poem that I referenced, I cannot help but feel disappointed that there are not any more poems being offered at this price in this eBook.

Louise Findlay’s “A Rogue’s Odyssey” is a fantasy filled poem that tells a very intriguing tale in a short time-frame of read. Think carefully about shelling out $0.99 for this book, yet at the same time I enjoyed her poem.

You have subscribed to alerts for Louise Findlay.

You have been added to Louise Findlay's favorite list.

You can also sign-up to receive email notifications whenever Louise Findlay releases a new book.