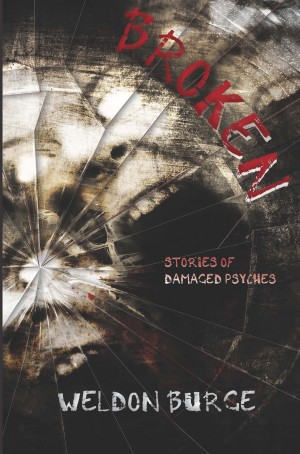 "Another Highway Fatality" -- A college girl, driving alone late at night during a heavy storm, is stalked by a car with a missing headlight

"White Hell, Wisconsin" -- A snow plow driver, plowing back roads in rural Wisconsin during a blizzard, fights for his life against elusive assailants

"This collection of short stories from Weldon Burge was exceptional. Besides his fine-tuned voice and sharp writing, the stories are all suspenseful, scary, and unique, despite the common thread of the theme. His ability to create visuals and evoke emotions with few words is amazing. There's nothing unnecessary in Burge's stories ... the prose is whittled down and crystal clear, allowing the reader to take the journey, however afraid you might be of where it will lead, without getting hung up on extraneous details or verbosity." -- Sydney Leigh
Download: epub mobi (Kindle) pdf more Online Reader
rtf lrf pdb txt
Price: Free! USD
Add to Library
Create Widget
Tags: suspense short stories psychological thriller psychological horror horror fiction horror stories short story collection smart rhino publications weldon burge
About Weldon Burge

Weldon Burge's fiction has appeared in Futures Mysterious Anthology Magazine, Grim Graffiti, The Edge: Tales of Suspense, Alienskin, Glassfire Magazine, and Out & About (a Delaware magazine). Threeof his stories have been adapted for podcast presentation by Drabblecast. His short stories have also been published in a number of anthologies, including Don't Tread on Me: Tales of Revenge and Retribution, Ghosts and Demons, Pellucid Lunacy: An Anthology of Psychological Horror, and Something Dark in the Doorway: A Haunted Anthology.

You have subscribed to alerts for Weldon Burge.

You have been added to Weldon Burge's favorite list.

You can also sign-up to receive email notifications whenever Weldon Burge releases a new book.