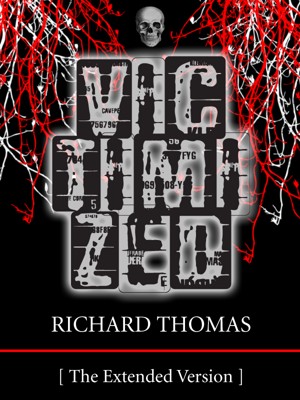 In the near future, Annabelle lives a fractured life, haunted by the shadows of her past, dark moments of abuse and freedom at the hands of her own kin. (This is a 7000 word short story) More
"'Victimized' is one of the best pieces of bad-ass, hard-core apocalyptic noir I've read in a while." --Scott Phillips, author of THE ICE HARVEST

"Put your dukes up, readers, because Thomas is gunning for the KO with this brutal little ass-kick of a story." --Craig Davidson, author of SARAH COURT

"As tough, ass-kicking and twisted as fiction gets. Imagine a Dear John letter that Hitler might have written to Lucifer right before he blew his brains out. Then crank things up ten notches." --Donald Ray Pollock, author of KNOCKEMSTIFF

"A horrifying vision...strong and energetic prose hot enough to blow a power plant. It isn't pretty and it isn't for everyone, but the best work never is." --Rob Roberge, author of WORKING BACKWARDS FROM THE WORST MOMENT OF MY LIFE

In the near future, Annabelle lives a fractured life, haunted by the shadows of her past, dark moments of abuse and freedom at the hands of her own kin. She has the opportunity to get into a boxing ring and fight her oppressor, to face the man that altered her, to beat him down with all of her rage. This is the way things are now, society given the chance to take on the murderers, the rapists, those that have tainted their lives, hurt their family, destroyed what was innocent and pure. Preparing to go to battle, Belle taps into her true identity, and changes, a warrior entering battle, unwilling to hesitate, ready to kill.

Richard was the winner of the ChiZine Publications 2009 “Enter the World of Filaria” contest. His short story “Maker of Flight” was chosen by Filaria author Brent Hayward and Bram Stoker Award-Winning editor Brett Alexander Savory. It has since gone on to also win at Jotspeak, beating out over 200 entries. This short was based on the novel Filaria by Brent Hayward, published by ChiZine in 2009. He was also the winner of the 2011 Cafe Doom / One Buck Horror contest, for his short story “Wicker Park Pause.” In 2011, he was nominated for three Pushcart prizes, as well as awarded a writing residency at Writers in the Heartland.

His debut novel, a neo-noir thriller entitled Transubstantiate (Otherworld Publications) was released in July of 2010 and includes a signed, limited edition of 100 hardcovers with bonus items (extra chapter, extended interview from chuckpalahniuk.net, and audio CD with five short stories), as well as a paperback and ebook.

In his spare time he moderates at The Cult writer’s workshop where they are putting together an anthology that Chuck Palahniuk will publish in 2012. He has been an Editor for Colored Chalk (Issue #6 – Waking Up Strange and Issue #9 – Heaven and Hell) and is Co-Editor and Designer at Sideshow Fables. He also writes book reviews and interviews for The Nervous Breakdown, as well as pieces for Lit Reactor, Bookslut, Outsider Writers Collective, The Cult, and Emerging Writers Network. Richard is a member of the Horror Writers Association and the International Thriller Writers. He was the Fiction and Poetry Curator for Around the Coyote, a Wicker Part art festival.

Reviews of Victimized by Richard Thomas

You have subscribed to Smashwords Alerts new release notifications for Richard Thomas.

You have been added to Richard Thomas's favorite list.

You can also sign-up to receive email notifications whenever Richard Thomas releases a new book.