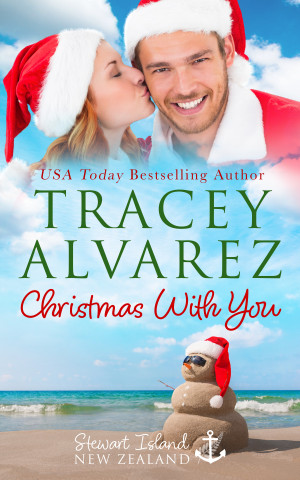 By Tracey Alvarez
Rated 5.00/5 based on 1 review
Carly Gatlin doesn’t want to spend another holiday alone so she’s come to New Zealand to be with her step-family. Kip Sullivan’s big, boisterous family have also arrived en-masse—please shoot him before the match-making gets out of hand. Kip wants to make Carly’s first Kiwi Christmas special, but will he gain more than mistletoe kisses from the woman who threatens to claim his heart? More
The Kiwi barbecue isn't the only thing sizzling this summer...

She’s a Holiday Grinch.
Carly Gatlin doesn’t want to spend another Christmas alone. With her beloved father gone, she’s desperate to be part of a family—so she’s spending the holidays with her step-brothers on Stewart Island. But even with sand, sun, and not a snowflake in sight, everything reminds her of what she’s lost. So no tree trimming, cookie baking, or kisses under the mistletoe for her, thanks. Especially not from Due South’s sexy bartender, Kip.

He’s a too-hot-for-his-Santa-suit killjoy.
Kip Sullivan’s moved hundreds of miles away from his family who’d like to see him married off before his next birthday—on Christmas Eve. Then ten days before the big event, his meddling relatives arrive en masse, and dear God, they’re planning to stay. With match-makers breathing down his neck, it’s becoming harder to ignore the temptation to unwrap Carly like a present under the tree. Kip agrees to help make Carly’s first New Zealand Christmas special. He’s got five holiday missions to complete—one involving a frisky fake reindeer—before he hopes to claim a mistletoe kiss…and maybe even Carly’s heart.

**This 40,000 word novella can be read as a stand-alone, but you’ll love it so much more if you’re read the earlier Stewart Island novels.**

CHRISTMAS WITH YOU is the fourth story in Tracey Alvarez’s best-selling Stewart Island books set against the stunning backdrop of Aotearoa, New Zealand. If you like heartwarming, sexy and sweet small town romances with a touch of comedy, you’ll love sharing the journey with these authentic men and women struggling to find their special someone.

Download your copy of CHRISTMAS WITH YOU and dive into these sensual romance novels!
Intended for mature 18+ aged readers who enjoy their feel good romance on the steamier side.

Praise for the Stewart Island series!

"It’s official…I’m hooked on this series! I want to jump on a plane and fly to this island, because apparently they grow them big and HOT in New Zealand…men that is!!!" ~ Swept Away By Romance

"Perfection comes in many shapes and forms, and Ms Alvarez delivers in her contemporary voice and quirky character traits that make a distinctive difference between average and stellar storytelling." ~ InD’Tale Magazine

"Just as the must-read series of Donna Kauffman (The Bachelors of Blueberry Cove), Jill Shalvis (Lucky Harbor), Terri Osburn (Anchor Island), Marie Force (The McCarthys of Gansett Island), Sherryl Woods (Chesapeake Shores) have entranced me with their seaside settings and caring communities - so has Tracey Alvarez - and I'm adding her series to my must-read shelf too."~ Fab Fantasy Fiction

Tracey Alvarez is a USA TODAY BEST-SELLING author living in the Coolest Little Capital in the World (a.k.a Wellington, New Zealand). Married to a wonderfully supportive IT guy, she has two teens who would love to be surgically linked to their electronic devices.

Fueled by copious amounts of coffee, she's the author of contemporary romantic fiction set predominantly in New Zealand. Small-towns, close communities, and families are a big part of the heart-warming stories she writes. Oh, and hot, down-to-earth heroes--Kiwi men, in other words.

About the Series: Stewart Island

A steamy contemporary romance series set on a wild and beautiful island off the coast of New Zealand.

Reviews of Christmas With You by Tracey Alvarez

I was relatively surprised by this little treat of a story in the Due South series. Unlike in the first three books, which were based more so on the three Harland siblings, Westlake family and established characters Kezia and Zoe, Kip and Carly are two relatively unknowns other than brief mentions in previous books, Kip especially more so than Carly. I was intrigued to find out more about these two characters and where their story would fit in with the whole Due South series but thoroughly enjoyed their story.

The story as a whole was relatively drama free but with enough tension at times that it wasn’t overly sweet and false feeling. Carly’s past christmas mission traditions and how they were incorporated into the present in the story .

Out of books 1 to 4, I would say Christmas with You was probably the easiest after book 1, In Too Deep, to read as a complete standalone because there is not quite so much emphasis on other supporting characters, although they do crop up here and there.

Christmas with You is a sweet, well written, heartfelt, HEA christmas story. Definitely give this story a try!

I received a free copy of this book in exchange for an honest review. I was not compensated for my review, and I was not required to write a positive review. The opinion expressed here is my own.

You have subscribed to Smashwords Alerts new release notifications for Tracey Alvarez.

You have been added to Tracey Alvarez's favorite list.

You can also sign-up to receive email notifications whenever Tracey Alvarez releases a new book.