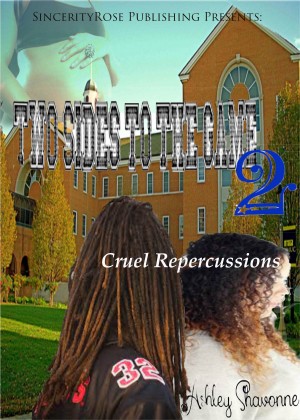 The family tree growing and dealing with those cruel repercussions. More
With the kids going away to college where they each face their own reality of the game. Samantha going into the second year of college seems to have life all planned out until an innocent night with her best friend, Julio Gurmara, turned into something more, it shakes her to her core that hes begins to doubt everything around her including herself. Jared, Sam’s brother, sees any female he wants he gets until he sets his eyes on Rachel’s daughter, Mariana. Will she be as easy or come hard with strings attached that he didn’t ask for. In this second installment, sex, lies and murder all on one campus will have those they thought that would be there forever turning their backs on them when another gives up her life completely to save her friend from a crime that saved their lives.

Ashley started out writing at the age of seven, which happens to be her lucky number. The were little books with pictures or whatever had came to mind. As she grew more as a writer and a person, her stories became more serious. She would considered herself open-minded as well as diverse, especially when it comes to her outlook on life and her writing style.With several books under her belt,including the Two Sides to the Game series and Duchessa, she continues to write and put out stories for the readers.

You have subscribed to alerts for Ashley Shavonne.

You have been added to Ashley Shavonne's favorite list.

You can also sign-up to receive email notifications whenever Ashley Shavonne releases a new book.