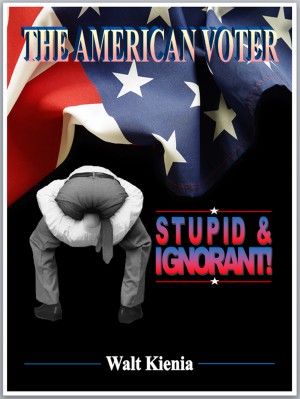 The American Voter: Stupid and Ignorant

By Walt Kienia
Only half of the people vote and half of that bunch do not have a clue as to what they are doing. The American Voter: Stupid and Ignorant, is a snarky look at the stupidity and ignorance found amongst the voting citizenry, the politicians they elect, and the professionals who report on their folly. More
For far too may Americans, stumbling through life is such a chore that many are fortunate that breathing is involuntary. Far too many make life moves and choices based on the skimpiest of logic, relying, instead, on stupidity and ignorance to guide the way. There is no immunity from this stupidity and ignorance in the context of how they approach the task of voting. The American Voter: Stupid and Ignorant, is a historical, anecdotal, and statistical look at how the American voter has dealt with the freedom and the right to vote, while also looking at the benefactors of their less than cognitive action.

An old, jaded, and cynical New Englander bellyaching about the stupidity and lack of common sense so prevalent in America today...when not tripping over my own.

Having developed an interest in politics during the Watergate hearings, you'd have thought I would have grown up to be a big ol liberal, fortunately, God pushed me in the "right" direction.

However, I was forced to study politics in a formal setting amidst the liberal intelligentsia (so called) at the University of Southern Maine. Therefore, my personal studies and observations are much more impressive than the degree conferred upon me by this institution...which I'll forever be paying for...in many different ways.

You have subscribed to alerts for Walt Kienia.

You have been added to Walt Kienia's favorite list.

You can also sign-up to receive email notifications whenever Walt Kienia releases a new book.