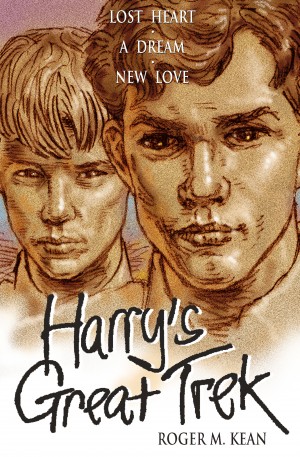 Rated 5.00/5 based on 1 reviews
Harry’s Great Trek concludes the “Empire Trilogy” which started with "A Life Apart" and "Gregory’s Story". An epic saga of love and war in the British Empire on the brink of change, Harry’s Great Trek has a cast of the humble and famous, honorable and scoundrels—in India, the Sudan, with a climax in the Boer War. There Harry’s future is decided as one quest ends and a new journey begins… More
What do you do when the person you have loved in secret since your schooldays finds happiness with another, leaving your heart bereft and your future a bleak, lonely prospect?

For Harry Smythe-Vane, junior officer serving in the British army at the end of the failed campaign to rescue Gordon of Khartoum from the Mahdist siege of 1885, finding childhood friends Richard and Edward united in love spells the end of a dream he knows was doomed from the start—more so, a dream condemned by society at large: the love of two men for each other.

Harry must now pluck up the courage to pursue an uncertain quest for an elusive new soulmate—his great trek to attain fulfillment.

From dangerous missions on India’s wild North-West Frontier to the deserts of Sudan, Harry forges a career and experiences fleeting friendships, but when a spell of leave takes him to London his heart is struck. He meets his almost-forgotten godson Jolyon Langrish-Smith, a troubled teenager in Oscar Wilde’s louche circle. It’s an encounter that pitches Harry headlong on a turbulent journey of emotional involvement, of hurt and joy.

Painting a vivid panorama of the British Empire at its height, with its multi-faceted but rigid society hovering on the brink of change, Harry’s Great Trek is an epic saga of love and war—alive with an engaging cast of the humble and the famous, the honorable and the scoundrels—which climaxes in 1900 amid the carnage of the Boer War. There Harry’s future is decided as one quest ends and a new journey begins…

I’ve been waiting for Harry’s story ever since I was introduced to him in A Life Apart. There was just something about Harry that captured my heart. I’m not sure if it was because he suffered from unrequited love and was never able to find another to replace his one true love or because Harry seemed to flounder and I’m drawn to those characters. It’s funny, he’s not a main character in A Life Apart and I really didn’t get to know a lot about him but I couldn’t get him out of my mind. He didn’t get his HEA in A Life Apart or in Gregory’s Story, book 2 of The Empire Series and I really thought he deserved to have one of his own.

Harry’s Great Trek isn’t just a story about the love of two men in a time when it was forbidden but a story about friendship, duty and sacrifice. It follows British Army Officer Harry Smythe-Vane and his company from one mission to another trekking their way through places that very few if any westerners have traveled mapping new lands. Engaging tribes that are primitive but no less dangerous, Harry and his crew align themselves with some and fight others.

Between missions Harry returns to London navigating society and its own pitfalls. Harry finds himself rubbing elbows with Winston Churchill - who accompanies Harry on later missions - and partying with Oscar Wilde who lives a secret life that eventually lands him in prison. It’s at a party with Oscar Wilde that Harry encounters his godson Jolyon whom he hasn’t seen for many years. Jolyon has grown into one of the most beautiful men Harry has ever seen and he’s instantly smitten but Jolyon resists Harry’s charms favoring the wilder side of London society and people. Eventually Harry wears Jolyon down and the two start a heart-warming romance. Wishing to be by Harry’s side Jolyon trains to be a munition and bomb expert then joins Harry’s company to travel to far off places.

Harry’s Great Trek took me to places I’d never be able to go except in my mind and Roger Kean’s narrative paints a vivid picture that makes it easy to imagine being there. I laughed, I cried, I cringed and I was put through a whole gamut of emotions with this story. There are times when the drama makes me want to hide my face behind my hands - an encounter with a particular tribe being a bit brutal and frightening, but it’s important to the growth of Harry and Jolyon’s relationship.

It’s a long story close to 500 pages but every word of this story makes it what it is: a wonderful adventure and a beautiful love story. I got my HEA or should I say Harry got his HEA and I’m forever grateful to author Roger Kean for giving me such an amazing story, with wonderful characters...but mostly for making Harry come to life.

One last note: 5 Stars for the cover art work by Oliver Frey