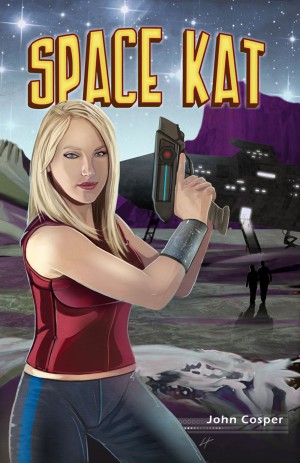 By John Cosper
When a ship becomes crippled behind enemy lines, a bounty hunter commandeers a pirate ship in an intergalactic quest to save her daughter from a deadly alien race. More
A mother will always protect her cubs... even in space.

A distress signal from the far reaches of space falls on deaf ears as a ship drifts helplessly into enemy territory. The only hope for the starship Andromeda and her crew lies with a hapless trader, his crew, and one angry mom.

When Kat, a notorious bounty hunter with a dark past, learns that her daughter is in danger, she hitches a ride into space with Tobias Skull, a man with a price on his head and a rebellious son of his own. But her hopes for a swift rescue are curbed by an ex-boyfriend, a sleazy alien crime lord, and the crate in Tobias's cargo hold with a secret of its own.

A slam-bang space adventure in the tradition of the Flash Gordon and Buck Rogers movie serials, Space Kat will rocket you half way across the galaxy on a journey filled with alien gangsters, deadly beasts, space armadas, and a little twisted romance. When Momma gets mad, nothing will stop her from saving her baby - even in space!
Available ebook formats: epub mobi pdf rtf lrf pdb txt html
Price: $2.99 USD
Buy Add to Library Give as a Gift
How gifting works
Create Widget
Tags: comedy pulp aliens space pirates bounty hunter
About John Cosper

John Cosper is an award-winning author, script writer, and filmmaker. He began writing drama in college for his church's youth ministry and soon expanded into film and fiction.

In 2014 John released his first book about pro wrestling Bluegrass Brawlers: The Story of Professional Wrestling in Louisville. Since that time he's written and/or published more than twenty books on the subject including biographies of Wahoo McDaniel, Tracy Smothers, Princess Victoria, Chris Candido, and Mad Man Pondo through his own wrestling label Eat Sleep Wrestle.

After many years of writing science fiction, his creative writing took a darker turn after Covid-19. He now writes horror and thrillers, all with a humorous bent, published through his independent label Dead Park Books.

John's other passions include movies, reading, football, ice hockey, and cooking. If he's not writing, you're most likely to find him spending time with his wife and kids.

You have subscribed to Smashwords Alerts new release notifications for John Cosper.