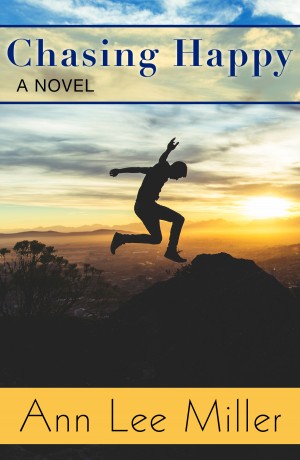 Nashville Star Samma Templeton’s music career bankrolls her future husband’s political campaigns. But she throws up before every concert and feels relegated to an item on the senator’s calendar.

Ann Lee Miller earned a BA in creative writing from Ashland (OH) University and writes full-time in Phoenix, but left her heart in New Smyrna Beach, Florida, where she grew up. She loves speaking to young adults and guest lectures on writing at several Arizona colleges. When she isn’t writing or muddling through some crisis-real or imagined-you’ll find her hiking in the Superstition Mountains with her husband or meddling in her kids’ lives. Over 100,000 copies of Miller’s debut novel, Kicking Eternity, have been downloaded from online retailers.

Chasing Happy continues Miller's series of thoughtful young adult novels. Though written from a Christian point of view, Miller refuses to give simplistic answers or paint a picture of an ideal world. She delves into the struggles of twenty-somethings and their quest for meaning, companionship and spirituality. As usual, she pushes boundaries in her portrayal of a young man wrestling with bisexual tendencies--but manages to do so with grace and honesty. Miller gives food for thought for those on both sides of a controversial issue.

I have never read a book as fast as I read Chasing Happy. When I started reading the book, I could not stop. I finished the book in 3 days, which is extremely rare for me. Chasing Happy was not only a page turned, but it also touched my heart on so many levels. This is a must read and keep book.
Marla N. Morris Tucson, Arizon

I've read two other books by Ann Lee Miller -- Kicking Eternity, which is my favorite, and The Art of My Life, which was also very well done. I started reading Chasing Happy with expectations based on the previous books. Ann Lee Miller lived up to those expectations by delivering a gritty, thought-provoking story line with characters who face their struggles head on. As always, she leads the reader through the development of the characters and makes you care about the outcome. Her writing has a flow that is easy to ride along without effort.

I knew when I began this book that it would be something to test my faith and beliefs, but among my faith and beliefs is in regard to those whose writings I've read and trusted before, growing in faith and belief in God's love as I read. Ann Lee Miller is one of the authors who tackle difficult subjects and use them to teach us how much God loves even me.

Chasing Happy has a couple of difficult subjects in it. You might be tempted to toss it out at the close of the first chapter--but I encourage you to follow the story to its conclusion. You'll find a piece of laughter or two and maybe need a box or two of tissues. It's the story of a young man (Zack) struggling with who he is and a young woman (Samma) who isn't sure if she wants to run to or away from the future that owns her. Both want to know better the Lord of Lords and what He wants of them.

Zack and Samma had been best friends as children, but both of them had grown up. Zack has sought her out, but she doesn't recognize him, at least not at first. It isn't long, though, before they're remembering their childhood games of truth or dare, the baseball games they loved to attend, and the long hikes.

And maybe while they're remembering, they'll learn of something old and something new.

Chasing Happy is available from Amazon, Barnes and Noble, and Smashwords.

I received a copy of this book free in return for an honest review.

Ann Miller writes about a young adults deal facing a difficult issues relevant in today’s society and she addresses it artfully through Christian values. It is a well written book which once again drew me into the characters who were so compelling I became fully invested in their storylines.

“This was what he wanted. To know and be known… Someone to fall asleep beside….”
Ash’s musings as Samma falls asleep beside him on the couch is the essence of what we all desire and encapsulates the tenderness of Ann Lee Miller’s new book, Chasing Happy.
Ann takes an honest look at how a young man confronts both his father’s and maybe his own homosexuality. At the same time he falls in love again with the girl next door. And more, so much more.
This book is a stellar read that gets it right on so many levels on a number of controversial issues. I highly recommend this ‘can’t put it down’ read.
*Please be aware that in this book, Ann goes deep into seriously racy (though not gratuitous) scenes. Probably not for everyone, on the other hand, worth skipping a paragraph here and there for a dynamite story.
If you haven’t read Ann’s previous books, Kicking Eternity, The Art of My Life, Avra’s God, and Tattered Innocence, check them out – you’ll be glad you did!

Chasing Happy was an enjoyable summer read. It had a bit of a slow start initially for me, but it kept up my curiosity and held my interest until the end. Ann has a way of getting into the main characters’ heads, revealing their innermost thoughts and feelings. Her story deals head on with the sensitive subject of confusion of one’s sexual identity that young people often experience due to the influences of today’s society and common belief systems. She successfully reveals the layers of the story without overwhelming the reader with too much information and then artfully brings closure to the different facets of the conflict.

In the story, the two main characters are on the precipice of making serious life decisions that will profoundly affect their futures. It shows how with one act of obedience and a little faith, God can lead a person and help him/her grow spiritually, despite mistakes and failures along the way. And one person’s obedience can also affect another’s life in major ways. Chasing Happy is a book that left me thinking about it long after I was finished.

Ann does an exceptional job of addressing the real life struggle that some individuals face. She does not shy away from this sensitive topic, as she describes the issues that Ash deals with along his journey.

Ann has the ability to use a kaleidoscope of ideas as she writes her pieces. In Chasing Happy, there are several near misses between Ash and Samma as they go through their lives.

Ann piques your interest with a variety of twists and turns; changing gears when necessary. I found Chasing Happy to be a joy to read that kept me coming back for more and more.

I'll start by saying Romance is not usually my thing. I am a Sci-Fi / Fantasy type of guy. But a well told story is always worth reading.

Chasing Happy follows two childhood friends: Ash and Samma. They haven't seen each other in some time, and when they meet up again things are very different. Ash is trying to explore his homosexuality to determine if he really is gay. Samma is a successful musician who is in a relationship with a senator. She questions if she really loves this man that her father has set her up with. Throw into this how each is trying to reconcile their problems with God, and you get a story that really makes you think.

Ann brought the story to life. To some, the misunderstandings and problems that occur might seem contrived and just simple plot devices. But I identified with them. I've experienced misunderstandings that have derailed plans. Sometimes truth really is stranger than fiction.

The struggles that the characters go through are not just contrived situations, either. They are things that people deal with today. "Am I really gay?" "Is this marriage a good thing?" Ann gives a Christian perspective on them, not that everyone will agree with the themes that are present.

This story will be controversial, and I have no doubt that Ann knows this. But she doesn't shy away from the issues, instead diving head on. I really appreciate that. It is also not a whitewashed telling of the issues, or beating around the bush. The way the women in the story talk is frank and is the way I've heard my female friends speak about such things. There are situations that push the boundary of the Christian Romance genre, but in a way that makes sense and challenges the characters of the story. (Yes, I don't read romance, let alone Christian Romance. I do know that certain situations would never occur in a normal Christian Romance story.)

Chasing Happy is an enjoyable story, with relatable characters and relevant situations of our culture.

(reviewed 12 days after purchase)
Sue Parker reviewed on Aug. 29, 2015
(no rating)
Chasing Happy is a great read on a very contemporary subject of finding our sexuality and letting God direct our lives and our decisions rather friends, family, etc. I found myself not wanting to put this book down. Highly recommend.

You have subscribed to alerts for Ann Lee Miller.

You have been added to Ann Lee Miller's favorite list.

You can also sign-up to receive email notifications whenever Ann Lee Miller releases a new book.