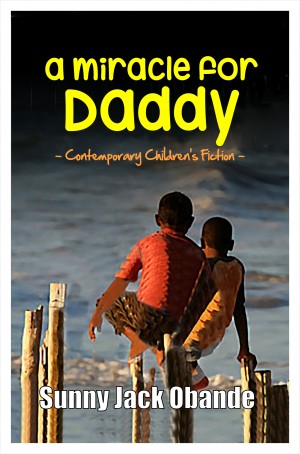 A Miracle for Daddy

Obande Sunny Jack was born in 1976. He attended the prestigious Government College Keffi and Kaduna Polytechnic. He has worked as a freelance script writer at various times for the NTA and KSTV (both in Kaduna State).
In 2007, his first novel, Agbenu And The Forest Spirits, was traditionally published by Apex Books, Lagos.
He is an active member of various writers’ forums, notably YouWriteOn.com and NaijaStories.com, and has published many literary articles with most of them selected as Editor’s picks.
He is a staff of the Nigerian Communications Satellite Limited, the best positioned Communications Satellite Company in the whole of Sub-Saharan Africa.
He is also a fitness freak and loves to watch documentaries and cartoons.
He is present working the last few chapters of his next novel.

You have subscribed to alerts for Sunny J Obande.

You have been added to Sunny J Obande's favorite list.

You can also sign-up to receive email notifications whenever Sunny J Obande releases a new book.