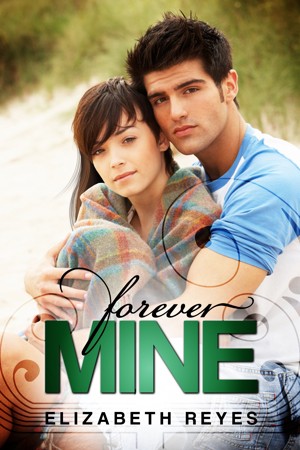 Forever Mine (The Moreno Brothers)

By Elizabeth Reyes
Rated 4.78/5 based on 9 reviews
"I can't even begin to express how much I loved this book!" ~Night Owl Reviews~

"Once you pick it up, be prepared to not be able to put it down." ~Amazon review~

"OMG! I love this book. I could not put it down. Can't wait for the second one to come out!" ~Amazon Review~ More
Seventeen-year old Sarah’s life is turned upside down when her single mom is sent to jail. She’s forced to move, leaving behind everything she’s ever known, including her best friend Sydney. Lost and bitter in a new school, her one goal is to save money and move back home. Then she meets Angel Moreno.

Enigmatic but gorgeous, Angel is almost too good to be true. Except for one thing, his archaic belief that guys and girls can never be “just friends”. The problem? Sarah’s best friend Sydney is not a girl.

I write because I must. It's not a choice or a pastime, it's an unyielding calling and my passion."

USA Today Bestselling Author, Elizabeth Reyes continues to answer to her calling on a daily basis. Since releasing her debut novel Forever Mine (Moreno Brothers #1) in 2010 she has now published 28 novels total and fast at work on the next. The excitement her Moreno Brothers, 5th Street, and Fate series have garnered have far exceeded her wildest dreams. It is with as much excitement that she'll continue to put out books related to these series as well as introduce brand new ones very soon.

Keep up with all her upcoming books/events/signings by visiting her website.
www.ElizabethReyes.com

Also come join the fun by visiting and liking her fan page on Facebook https://www.facebook.com/pages/Elizabeth-Reyes/278724885527554

Also in Series: The Moreno Brothers

Reviews of Forever Mine (The Moreno Brothers) by Elizabeth Reyes

Kcoolsweet as it works past some rough edges in a few working and then personal relationships. Can't a gurl just be nozy? These Moreno brothers in San Diego turn out to be really something. Muy guapos, too. It's enough to have me eating Mexican tonight, and I don't mean Taco Bell or Chipotle.

This was a very pleasant surprise. These were two intense young people with some very realistic and relateable issues. I enjoyed the different POVs of both characters. I just wish Angel was not so stereotypical latino male considering the age we live in.

(review of free book)
jenelle palmer reviewed on Jan. 4, 2013
(no rating)
I loved this book I could not put it down..I read it in a day. I can not wait to read the rest of the series.

This was easy to read and made you feel close to Sarah right from the start. I enjoyed how smooth the story flowed. Thanks for sharing!

Sarah was happy living in Flagstaff, Arizona. It was the longest she had a place that could be called home. She had always avoided friendships because she never stayed long but Sydney sat by her at lunch and befriended her. He became her best friend and was like a brother. They helped each other through tough times. With her mom working so much she became part of the Sydney's family. Right before Senior year Sarah's mom informs her she is going to jail and that Sarah will go to La Jolla, CA and stay with her Uncle, aunt, and cousin Valerie. Sarah is devastated. She decides she will work and come January first when she turns eighteen she will return to live with the Maricopa's in Flagstaff again.

Once in California Sarah starts babysitting to earn money to pay to live with Sydney's family and she determines once again not to make friends at school, besides Valerie.

Angel Moreno locks eyes with the lost looking girl across from him on that first day of school and Valerie makes sure Sarah knew who was staring at her. Sarah remembered Angel from her visit two years ago. She had seen him on the beach surrounded by a group. She had ended up walking with a guy named Jesse who has continued to try and contact her in Arizona the last few years but she wanted nothing to do with him. When he starts bothering her on the field where she is running, Angel comes to her rescue.

Angel and Sarah quickly find they are strongly attracted to each other. Valerie informs her how intense the Moreno's are and Sarah experiences quickly how protective and possessive Angel is. Being she never had a father she don't mind.

Angel assumes her best friend, Sydney, is a girl and Sarah has trouble correcting him. The time is never right. When Angel tells her there is no such thing as a friendship between a guy and girl she puts off telling him longer. Some secrets come back to bite you. As does this one.

Great story and there are side stories as well. Sofie Moreno and Eric as well as Valerie and Alex Moreno. Which those characters have their own books as well in Always Been Mine & Sweet Sofie.

Forever Mine is a story of first love. It delves into all of the trials and tribulations that the young heart goes through at such a tender age. Sarah is a seventeen year old girl who finds herself in a new school after some unfortunate circumstances in her life. She meets Angel who is a dreamy but a bit over possessive boyfriend. They fall head over heals in love but soon learn that sometimes it takes a little more to make a relationship last, like trust and honesty.

I have to say that I loved this book. It was written with such description and emotion that I felt as if I were in the story and falling in love for the first time all over again. I felt that the writer portrayed an accurate depiction of a whirlwind high school romance. All of the characters that are introduced are dynamic and easy to fall in love with. Forever Mine was heated and exciting. I literally could not got to sleep because I couldn't stop thinking about this book. The best part, No werewolves or vampires anywhere! Finally an awesome book about real people with real circumstances.

I loved this book. Sarah and Angel's relationship was so sweet and all of the secondary characters were awesome as well, I want to know what happens to them!!

(reviewed 3 days after purchase)
BookWhisperer reviewed on Aug. 2, 2011
(no rating)
Forever Mine offers an intense and slightly possessive love story that romance fanatics will love. The story begins will Sarah’s life crumbling around her. As her mother is carted off to prison; she is forced to leave everything and everyone that she knows. Everyone includes her best friend Syndey. With every intention of returning Sarah succumbs moving in with her cousin and starting a new school. Everyday carries a sole purpose of attending school and making enough money to return; or that is until she meets Angel Moreno. Angel is an awesome character, but yet extremely protective and mildly possessive. It is nothing like abuse or controlling, but touchy about whom Sarah interacts with that is of the male persuasion. Although, these qualities are quite fitting for Sarah character; changing the readers impressions of these action to something more attractive. Sarah life has had very little consistency, other than that of her best friend, and she welcomes someone that always watches out for her. As the romance increases Sarah is conflicted, because Angel is very forthcoming with this protectiveness making it clear that he would be less than comfortable with the knowledge that Sydney just happens to be a guy. After many occasions where Angel verbalizes his opinions that guys and girls “can’t be just friends”, she is thrown into a gulley of lies to protect her friendship and her growing love for Angel. Reyes offers a bitter sweet romance that will keep readers hanging on every page. Be aware that this novel should be directed more toward the mature YA audience due to its sexual content. The story will carries a extremely fast pace, and with its addictive story readers will find themselves flying through the pages. Reyes talented writing promises for excellent read, and will leave readers craving more. The next book in this series Forever Yours takes Angels brother through yet another mouth watering romance. I look forward to reading the remainder of this series. Be ready for a powerful story and the promise of love that will stand the test of time.

You have subscribed to alerts for Elizabeth Reyes.

You have been added to Elizabeth Reyes's favorite list.

You can also sign-up to receive email notifications whenever Elizabeth Reyes releases a new book.