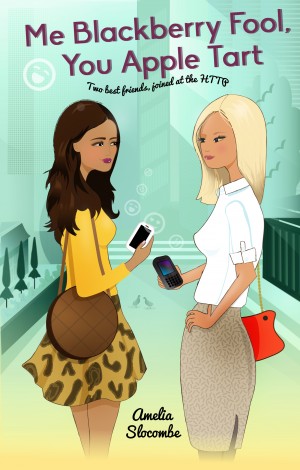 Me Blackberry Fool, You Apple Tart

By Amelia Slocombe
Rated 5.00/5 based on 2 reviews
Told entirely by email and text, Me Blackberry Fool, You Apple Tart is a laugh-out-loud tale of the importance of friendship, love and the humble smart phone. More
Best friends Isla Butterfield and Rachel Ku are inseparable. Inseparable, that is, thanks to the wonders of modern technology and humble smart phone.

Isla is a lawyer in a cutthroat city law firm, working 90-hour weeks in a job she hates. The rest of her time is spent dealing with her recently divorced father, worrying about premature ageing, wishing she'd followed her dream of becoming an actress and hiding her designer clothes' receipts from her long-term boyfriend, Toby - a biologist with mild OCD.

Rachel is stuck in a dead-end 9-5 marketing job for a manufacturer of commercial sink units. Her life is troubled by her crazy thoroughbred horse Aristotle (who she can't afford), her eccentric Malaysian mother with an internet shopping addiction, and her emotionally detached boyfriend, Spencer. Spencer never calls, is always late and prefers to spend his time at the beck and call of his best friend Alex Robertson, a well known and extremely good looking premiership footballer.

After a chance encounter with the notorious Alex Robertson, Isla is given a glimpse of a very different existence. But does she really want a life of money, celebrity hangouts and Harvey Nicholls' stylists? And if she does, how much is she willing to sacrifice to get it?
Download: epub mobi (Kindle) pdf more Online Reader
rtf lrf pdb txt
Price: Free! USD
Add to Library
Create Widget
Tags: friendship female best friends lawyer email

Reviews of Me Blackberry Fool, You Apple Tart by Amelia Slocombe

This is a very funny chick lit novel, told in the form of an exchange of emails/texts. Isla, the main character, works for a law firm in London (and as I happen to have worked in several of those too, I can confirm that the depictions of lawyer behaviour are pretty accurate). Her best friend, Rachel, works in the marketing department of a firm that sells plumbing and toilet accessories. Rachel's rather useless boyfriend also happens to be the best friend of a Premier League footballer. The footballer takes a bit of a shine to Isla, who is already in a long term relationship. I won't reveal any more of the story, but it is very readable, the plot moves ahead at a decent pace and most importantly, it is genuinely funny. I also enjoyed some of the secondary characters, like Isla's Dad (a man devoted to the infinite culinary possibilities of mince) and Rachel's mildly psychotic Mum. For a longer review, see: http://paulsamael.com/blog/me-blackberry-fool-you-apple-tart

(review of free book)
Julie Laws reviewed on July 4, 2016
(no rating)
I just loved this book. It was all emails and texts but made true sense between friends and how women communicate in this day and age. Wonderful read and could not put it down. PS I am in my late 40's, before the real tech age.......

It was interesting reading a book composed of only texts and emails. I'm glad things worked out for Isla and Rachel.

You have subscribed to alerts for Amelia Slocombe.

You have been added to Amelia Slocombe's favorite list.

You can also sign-up to receive email notifications whenever Amelia Slocombe releases a new book.