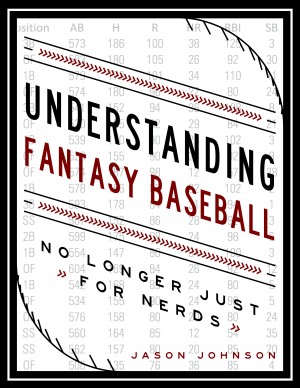 By Jason Johnson
When trying to learn fantasy baseball, many people aren't sure where to begin. Some search the web for countless hours while others get frustrated and simply give up. The goal of Understanding Fantasy Baseball - No Longer Just for Nerds was to create a way for anyone to quickly and easily gain a better understanding of the game. More
Historically, people that have had the most interest in fantasy baseball have been statistic junkies and lovers of baseball in general. People who immerse themselves into spreadsheets and stare at computer screens to develop strategies have made a name for themselves in the industry. With technological advancement in recent years however, this is no longer the case. Information is very accessible and easily compiled so that almost anyone can put together a team and compete in fantasy baseball with a reasonable amount of time, research, and luck. It is not nearly as difficult to find player statistics, trends, reports or any other type of information that you need to succeed in your league.

When I began working on this book, many people asked me why I was writing it. What could this book offer that other published works didn’t already talk about? There is some truth to those questions. There are plenty of available works published that provide a tremendous amount of knowledge about fantasy baseball. Reading other fantasy baseball articles and books myself, I’ve found that many of them, while thorough, tend to neglect the fundamentals. They assume that any reader already has a good grasp of the basics. While that often may be the case, I believe it’s critically important not only to know the basics but to completely understand how to use them to your advantage. Having this book as a foundation, you can then better understand some of the more complex topics: sabermetrics, drafting, trading, etc.

In this book I will provide insights into not only the basics of fantasy baseball, but will also delve into complex strategies and statistical analysis to help you succeed. In each section, I will first present the topic and then discuss how understanding it in detail will help you as a fantasy baseball team owner. I’m certain that even savvy fantasy baseball players will be able to take away at least a few insights to improve their overall fantasy baseball experience. In one section in particular, Relative Draft Value, I provide original, self-developed formulas and strategies that you simply can’t get anywhere else. I will be focusing primarily on season long leagues; however I have also dedicated a section to daily games which have become extremely popular and deserve discussion. In short, this book will go into almost everything you need to know to start yourself down a path to fantasy baseball success.
Available ebook formats: epub mobi pdf rtf lrf pdb txt html
First 20% Sample: epub mobi (Kindle) lrf more Online Reader
pdb
Price: $4.99 USD
Buy Add to Library Give as a Gift
How gifting works
Create Widget
Tags: statistics baseball sabermetrics fantasy baseball baseball statistics stats baseball analytics baseball stat
About Jason Johnson

Jason is a happily married father of one that resides in New England. He has a bachelor’s degree in Information Technology and works full time for a large corporation supporting their IT infrastructure. He’s an avid bowler and has bowled competitively at a high level for the last 20+ years. At one time, he had a great interest in all types of video games as well as trading card games (IE. Magic the Gathering). You might say that he fits the ‘nerd’ mold quite well.

Jason has been a fantasy sports enthusiast for the last 10+ years. He’s competed in all of the 4 major fantasy sports (baseball, football, basketball and hockey) as well as dabbled in many others. Of all of the fantasy games though, he excels at and enjoys fantasy baseball the most. As Understanding Fantasy Baseball – No Longer Just for Nerds uncovers, the return on investment that fantasy baseball provides, compared to other fantasy sports, plays a huge factor in his passion for the game. He has had success at many levels, and consistently wins leagues annually against high end competition.

Jason has posted a variety of fantasy articles for LuDawgs.com; many of which have been incorporated into this book. They not only include fantasy baseball, but also cover fantasy hockey, daily fantasy sports as a whole, and general guidelines for someone just getting into fantasy sports in general.

You have subscribed to alerts for Jason Johnson.

You have been added to Jason Johnson's favorite list.

You can also sign-up to receive email notifications whenever Jason Johnson releases a new book.