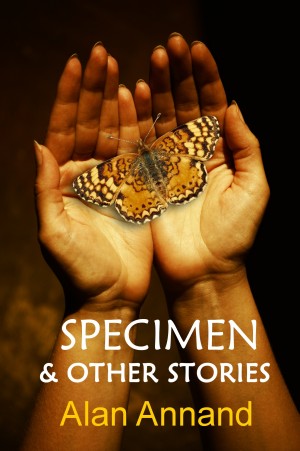 Bananarama: Reformed meat-eater embarks on a 15-day bananas-and-orange-juice diet, with surprising side effects.

River Girl: Middle-aged bureaucrat takes a detour on his morning jog that leads him to an unexpected rendezvous with Fate.

Specimen: A wealthy butterfly collector visits his twin brother, warden of a penal colony, who is building his own unique collection.

ALAN ANNAND is a writer of crime fiction, offering an intriguing blend of mystery, suspense, thriller and occult genres. When he’s not dreaming up ingenious ways to kill people and thrill readers, he occasionally finds therapy in writing humor, short stories and faux book reviews.

Before becoming a full-time writer and astrologer, he worked as a technical writer for the railway industry, a corporate writer for private and public sectors, a human resources manager and an underground surveyor.

Currently, he divides his time between writing in the AM, astrology in the PM, and meditation on the OM. For those who care, he’s an Aries with a dash of Scorpio.

Reviews of Specimen & Other Stories by Alan Annand

It doesn’t matter what Alan Annand writes, I’ll read it. Over the years, I’ve come to trust him as an author, and when I saw he had a short story collection out, I downloaded and devoured it.

Specimen & Other Stories is a mix of the creepy, the icky, and the hilarious, some of them falling into more than one category.

The offerings begin with the humour piece “Bananarama.” This one also falls under icky though with a side-benefit of laughter. You might think you don’t want to read about someone else’s bowel troubles as he struggles to go vegetarian by eating nothing but bananas and drinking only orange juice, but it’s worth it despite the mental images seared into your brain. I laughed out loud until the tears flowed, and I’ve only done that with a Dave Barry offering before. Kudos to Annand for providing what they call the best medicine.

“The Date Square Killer” tells the story of a hitman scoring a date before he goes to work. The creepiness factor heightens as the killer ruminates on life and social justice. The story captured my interest and held it, a typical feature of Annand’s writing.

“River Girl” is all wry humour and middle-aged angst. Stanley the cad has a life-changing experience with a free-spirted woman he encounters in Toronto’s Don River. It’s an excellent sample of Annand’s writing and why I always come back for more.

“Specimen” brings back the creepiness and dispels the idea that twins can read each other’s minds. Annand plays with twin relationships as he did in “Hide in Plain Sight,” and the results are just as deadly and just as entertaining.

“The Bassman Cometh” takes us back to all-out humour and doesn’t disappoint. I would have enjoyed knowing Annand in university, but perhaps from a distance, as an observer. His description of his escapades with Margaret Atwood again made me laugh out loud.

“The Naskapi and the U-Boat” tells the story of Germans in World War two installing a weather station and finding themselves flummoxed by members of an aboriginal family. It’s the one I found most emotionally engaging as it engendered empathy for the innocent family.

While I don’t typically go for short-story collections, I enjoyed this one. Each story was different though unmistakeably Annand. Well worth the read, and if you haven’t read anything before by Annand, it’s a good place to start.

You have subscribed to alerts for Alan Annand.

You have been added to Alan Annand's favorite list.

You can also sign-up to receive email notifications whenever Alan Annand releases a new book.