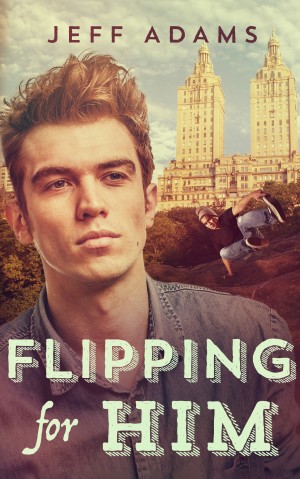 By Jeff Adams
Kevin McCollum is a high school junior with the usual things on his mind: getting good grades, having fun, and finding a boyfriend. He meets Shin after watching him practice parkour, and they quickly fall for each other. Cultures clash, however, when Shin’s parents reveal their expectations that he date only Japanese boys. Is their twenty-first century love doomed before it even truly begins More
Finding a guy was easy. Keeping him might be harder than running up a tree.

Kevin McCollum is a high school junior with the usual things on his mind: getting good grades, having fun, and finding a boyfriend. The last one was eluding him until he noticed the "parkour guy." After several days of pretending to study while watching the attractive teen jump on rocks, run up trees, and do flips, Shin finally comes over to introduce himself. As they start dating, Kevin should've known it wouldn't be that easy.

Shin's parents only want their son to date Japanese boys. When cultures clash and pressures mount, Kevin has no idea how to subvert traditions and Shin's parents to keep the boy he cares about.

Kevin will need to clear some tricky obstacles to make his modern love story a reality.

"Flipping for Him" is a gay YA multicultural romance that features fast-paced scenes, young teen love, and a sweet story. If you've ever been in love, then Jeff Adams' latest will warm your heart all over again.

Jeff Adams has written stories since he was in middle school and became a published author in 2009 when his first short stories were published. He writes both gay romance and LGBTQ+ young adult fiction…and there’s usually a hockey player at the center of the story.

Jeff lives in central California with his husband of more than twenty years, Will. Some of his favorite things include the musicals "Rent" and"[title of show]," the Detroit Red Wings and Pittsburgh Penguins hockey teams, and the reality TV competition "So You Think You Can Dance." He, of course, loves to read, but there isn’t enough space to list out his favorite books.

Learn more about Jeff, his books and find his social media links at JeffAdamsWrites.com.

Reviews of Flipping for Him by Jeff Adams

You have subscribed to alerts for Jeff Adams.

You have been added to Jeff Adams's favorite list.

You can also sign-up to receive email notifications whenever Jeff Adams releases a new book.