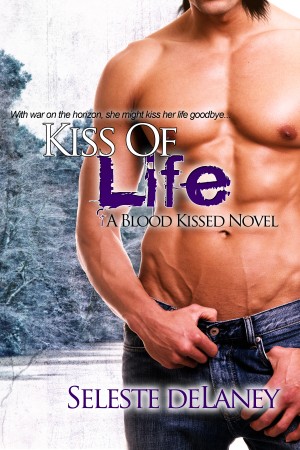 Jocelyn can't spit without hitting a supernatural lately. It would be bad enough if they were all friends, but half of them want her dead. And her army...isn't one. At least not yet. But with war nigh, the death toll rising, and Michigan’s most famous harbinger of doom showing up on the scene, the army of the Blood Kissed is hoping for a miracle, praying to be graced with a little kiss of life... More
The vampire’s curse has been awakened, and Jocelyn has no choice but to accept her destiny as the Blood Kissed—the one destined to destroy the vampires…or rule them. While Max and Chad want to help her reach her full potential, not all of the supernaturals share their plan.

The Council of Elders, a crazed sorcerer assassin, and a vampire hunter out for revenge have driven Jocelyn into hiding. She and her ragtag army have holed up in the forests of Michigan’s upper peninsula to get ready for the fight. If training is any indication, they should be ready for war by the time she turns fifty.

But no one is going to let her wait that long. War is nigh, the death toll is rising, and when Michigan’s most famous harbinger of doom shows up on the scene, the army of the Blood Kissed is hoping for a miracle, praying to be graced with a little kiss of life…

At a young age, Seleste deLaney discovered the trick to not being afraid of the monsters under the bed was to turn them into heroes. Since that time, she’s seen enough of human monsters that she prefers to escape to fictional worlds where even the worst demons have to play by the rules and the good guys might end up battered and bruised (or dead), but they always win. And really, isn’t that the way it should be?

She resides in the Detroit area with all her favorite monsters (nice ones—some are furry and the others call her Mom) and is hard at work on her next book. In those rare moments when she isn’t battling terrorists, vampires, or rogue clockworks, she can be found all over the Internet, where she loves to interact with readers.

About the Series: Blood Kissed

She's come to rule the vampires...or destroy them, but until the Blood Kissed comes into her full powers, she is nothing but a mere mortal hoping to live to see her next birthday.

With the fate of the supernatural world at stake, can her vampire protectors keep her safe long enough to fulfill her destiny or will those seeking eternal power destroy her first?

You have subscribed to alerts for Seleste deLaney.

You have been added to Seleste deLaney's favorite list.

You can also sign-up to receive email notifications whenever Seleste deLaney releases a new book.